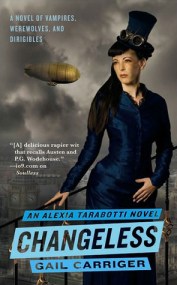 “I believe there is considerable range in the bang of most guns.”
“Uh…”
‘Ah, Ivy, spreading a verbal fog wherever she goes.‘ – page 188

Alexia Maccon, the Lady Woolsey, awakens in the wee hours of the mid-afternoon to find her husband, who should be decently asleep like any normal werewolf, yelling at the top of his lungs. Then he disappears; leaving her to deal with a regiment of supernatural soldiers encamped on her doorstep, a plethora of exorcised ghosts, and an angry Queen Victoria.
But Alexia is armed with her trusty parasol, the latest fashions, and an arsenal of biting civility. So even when her investigations take her to Scotland, the backwater of ugly waistcoats, she is prepared: upending werewolf pack dynamics as only the soulless can. She might even find time to track down her wayward husband, if she feels like it.
CHANGLESS is the second book of the Parasol Protectorate series: a comedy of manners set in Victorian London, full of werewolves, vampires, dirigibles, and tea-drinking.

Well! What a great Scottish idiot!! Dislike this ending. DISLIKE. He will have so much grovelling to do and it might not even help!! At least, he better be doing some grovelling…
For a bunch of werewolves however, they don’t seem to do much sniffing out of things and smelling of the truth. An oversight I feel. So many issues could have been avoided.

As to the overall plot, SO MUCH CROSSOVER! Not all of it good. Wait, that’s not plot…Egypt! Egypt is in this story! Altogether a pretty clever tale, though I’m still all a flutter over the ending.
Rather enjoyed the look into Maccon’s past and the seeing of familiar faces, even if they aren’t supposed to currently be familiar as I’ve read the series out of order, but I don’t care! (and any slight inconsistencies within the crossover can easily be explained away as UNDER COVER! So clever)

Also I feel I’ve been reading far too much steampunk recently, I’ve started to talk, or at least write, like a Victorian lady with Scottish tendencies. Quite bemusing.