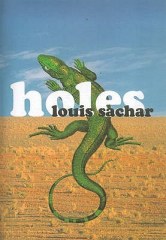 “If only, if only,” the woodpecker sighs,
“The bark on the tree was as soft as the skies.”
While the wolf waits below, hungry and lonely,
Crying to the moo-oo-oon,
“If only, If only.”

Camp Greenlake is a place for bad boys, where the belief is: “if you take a bad boy and make him dig a hole every day in the hot sun, it will turn him into a good boy.” When Stanley Yelnats, accused and found guilty of a crime he did not commit, is sent to Camp Greenlake he really doesn’t think it can be so bad. Stanley and his family try to pretend that he is just going away to camp like the rich kids do, and he promises to write to them every day. But the harsh realities of the camp, and the evil Warden with her lizard-venom impregnated fingernails with her own reasons for making the boys in her charge dig so many holes, sometimes make dying seem like a great idea. When Stanley leaves the camp to go in search of his friend Zero, their journey towards freedom becomes a battle with hunger, thirst and heat in the shadow of Big Thumb–a mountain so entwined in Stanley’s own family history that he knows if they can reach it they will somehow find salvation.

I’m sure that I saw the film first and I absolutely loved it. I can’t tell you how many times I’ve seen it and when I think of holes, I have to admit I think of the film. But I have read the book and I do intend to read it again.

What I loved about this story, film or book, is how complexly interwoven the whole affair was. The story has three start points, a young man visiting a wise woman on a matter of the heart, a kindly school teacher in a lakeside schoolhouse and a young man who was just in the wrong place at the wrong time. Each of these three stumble over and issue that is problematic. Eventually all 3 story lines merge into one epic finale.

Interwoven story lines are one of my favourite things. Especially as it’s done in this book, it’s almost like time travel, yet it’s clearly not.

I picked up book 2 at the book fair over the weekend and I’m terribly curious to see if that has the same kind of writing style. But considering how epic Holes was, I’m not convinced it will live up to the original.