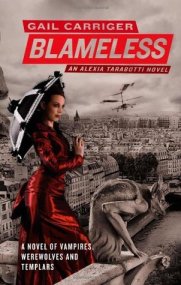 “One should do what one is best at on as large a scale as possible.”

Quitting her husband’s house and moving back in with her horrible family, Lady Maccon becomes the scandal of the London season.
Queen Victoria dismisses her from the Shadow Council, and the only person who can explain anything, Lord Akeldama, unexpectedly leaves town. To top it all off, Alexia is attacked by homicidal mechanical ladybugs, indicating, as only ladybugs can, the fact that all of London’s vampires are now very much interested in seeing Alexia quite thoroughly dead.
While Lord Maccon elects to get progressively more inebriated and Professor Lyall desperately tries to hold the Woolsey werewolf pack together, Alexia flees England for Italy in search of the mysterious Templars. Only they know enough about the preternatural to explain her increasingly inconvenient condition, but they may be worse than the vampires — and they’re armed with pesto.
BLAMELESS is the third book of the Parasol Protectorate series: a comedy of manners set in Victorian London, full of werewolves, vampires, dirigibles, and tea-drinking.

Stupid werewolf. She really should have stormed the castle and given him what for, but he was terribly beastly.

This book goes a long way to giving out some information on the history of the Preternaturals, mostly within Italy, considering this is where Alexia flees to. There are perhaps MORE questions not less when you get to the end, but they are far, far more interesting questions to have.  They lead back to ancient civilisations that we have only, as yet, glimpsed, but hopefully we’ll get to see more of them.

And Professor Lyall really needs some love at this point, for being a most superb beta and holding the whole world together while his ridiculous alpha was otherwise engaged.

Kind of ends in the middle of the story, but then that’s not a new thing. This seems to be one story over 5 books with no convenient and proper stopping places.