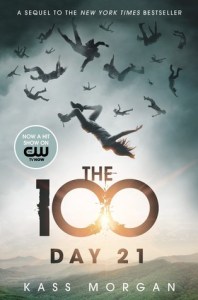 No one has set foot on Earth in centuries — until now.
It’s been 21 days since the hundred landed on Earth. They’re the only humans to set foot on the planet in centuries…or so they thought. Facing an unknown enemy, Wells attempts to keep the group together. Clarke strikes out for Mount Weather, in search of other Colonists, while Bellamy is determined to rescue his sister, no matter the cost. And back on the ship, Glass faces an unthinkable choice between the love of her life and life itself.
In this pulse-pounding sequel to Kass Morgan’s The 100, secrets are revealed, beliefs are challenged, and relationships are tested. And the hundred will struggle to survive the only way they can — together.

Day 21 continues straight from where The 100 finishes. Day 21 is an important day as its the day that radiation sickness starts to show physical symptoms. With a small number of the 100 showing signs of illness Clarke must decide, are they suffering from radiation poisoning or not? There is only a small window to administer a life saving drug but if given to a patient not suffering from radiation then it will kill them. With the appearance of a Grounder, Sasha, Clarke is reluctant to jump to conclusions. But is she sacrificing more innocent people to die a slow and terrible death?

As with The 100, Kass Morgan continues to tell the story through the eyes of four main characters. As this worked well for me the first time round I was happy that she hadn’t changed this and that it was the same four characters as last time, Wells, Clarke, Bellamy and Glass. Again, it seemed like the pace was fast even though hardly any time actually passed and i was never bored. It’s moved away from the screen adaptation, which i found refreshing as it was less predictable.

I loved all the little twists in the romances between Bellamy and Clarke, and Glass and Luke. There was just the right amount of drama and angst without it becoming eye-rollingly clichéd.

With the promise of more arrivals to the Ground, a faction of Grounders threatening the 100 and a psychotic killer in their midst. This is fast becoming a favourite of mine. I can’t wait for the next instalment.