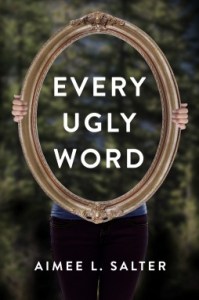 Note: a copy was provided courtesy of Alloy Entertainment, through Netgalley, in exchange for an honest review. No compensation was given or taken during this process.

“I lost almost every single friend I had in the space of a week when I was thirteen – not because what I’d done was so awful. But because the people everyone wanted to be friends with decided it was awful, and they’d crucify anyone who didn’t agree.” Location 490

When seventeen-year-old Ashley Watson walks through the halls of her high school, bullies taunt and shove her. She can’t go a day without fighting with her mother. And no matter how hard she tries, she can’t make her best friend, Matt, fall in love with her. But Ashley also has something no one else does: a literal glimpse into the future. When Ashley looks into the mirror, she can see her twenty-three-year-old self.

Wow, just wow! It’s been a long time since a book reduced me to tears in public, but I found myself blubbering like a baby and ranting about the injustice of the situations that Ashley was having to deal with!

It was nice to have that mysterious sci-fi edge to it. On the one hand the story was so realistic that it had me wondering if her seeing an older version of herself was actually just a coping mechanism she had developed to help her deal with everything (and to be honest I wouldn’t have blamed her if she had – it was horrible) but at the same time she was so clever and so brave that I was really hoping it was real! It was devastating that she only had this older-version of herself to talk too. Her mother was easily the worst character because she wouldn’t listen only told her to try harder to fit in! As though everything that happened was her fault! but her best friend Matt wasn’t much better… its sad cos there are so many people like him, those people that refuse to see what is happening to others because its easier for them.

There were just so many lines in this book that made my heart break and I don’t know why! Perhaps because the pain behind them was so raw… these are a few of them…

“Then she looked right at me, and the pity on her face made me wish I’d never been born.” Loc 1979

It was such a difficult book to read but at the same time I would recommend it to everyone. Aimee Salter has created something so full of emotion and written it in such a unique and authentic way that it makes this a contemporary YA that definitely can’t be missed and once read… never forgotten. Aimee Salter drew on her own experiences and emotions to write this book and it definitely shows through as it’s so powerful and moving.

I feel that this will be a book that helps so many young people dealing with bullying. I think its important to draw attention to the Teen help groups available -

IN THE UK: Childline (for teens)