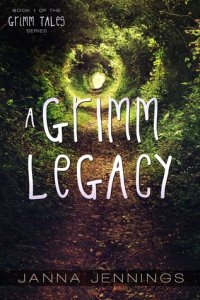 Enchanted castles and charming princes thought to exist only in stories come to life in this classically twisted fairy tale that combines the timeless quality of folktales with the challenges of the modern world.

The woods of Elorium appear ordinary to Andi… until the birds start to talk and elves answer doors. Whisked out of her world along with three strangers, Andi finds herself the reluctant guest of Mr. Jackson, a perplexing millionaire who claims to be able to help them get home. The secrets he harbors, however, make it difficult to know just who to trust.

When the group of teenagers discover that in this new world, fiction is anything but, and that they all have unexpected family ties to this fairy tale land, they must learn to rely on each other. The only way to survive evil fairies and giants intent on keeping them in Elorium is to rely on each other.

Faced with characters short on whimsy and bent toward treachery, Andi, Quinn, Fredrick, and Dylan are forced to play their parts in unfinished fairy tales. But in Elorium, happily ever after is never guaranteed.

I really enjoyed a lot of this book but silly things stopped me from loving it. Many of these issues were due to the lack of editing. A Grimm Legacy was peppered with spelling and grammatical errors and in one chapter there was repetition which through me completely.

The story was written, in alternating chapters, from the point of view of four teens who have been whisked away from our world and to a place called Elorium. Elorium is a place of fairy-tales full of many castles. Unfortunately for Andi, Quinn, Fredrick and Dylan these are not Disney fairy-tales but Grimm fairy-tales, and in their search for a way home they must escape many evil villains. It’s hard to explain but the ideas behind the different obstacles they encountered where really clever and interesting but, for me, it seemed a little clumsily written, like we were being rushed through it. I felt that some of the characters, therefore, suffered a change in personality. This was most noticeable in Quinn. One moment she would be scaling trees to go help Fredrick, the next she was a damsel in distress stuck in a tower. Fredrick too seemed shy one moment, and then a leader the next. Maybe its just me but it confused me a little.

I really liked Andi though. She was obviously the core main character and easily had the best storyline! I completely loved the twist that they were all related to a fairytale character who had managed to escape the confinements of their fairy-tale.

I also enjoyed the fact that while there was an obvious attraction between characters it was never fully developed and never played to much upon. I know it seems strange, but I think a romance thrown in as well, would have sunk this for me. It was refreshing to have a touch of romance but no romance that would take over from the interesting story-lines.

Overall, an enjoyable fairytale adaptation but just needs a little editing to make it perfect.

Note: a copy was provided courtesy of Patchwork Press, through Netgalley, in exchange for an honest review. No compensation was given or taken during this process.