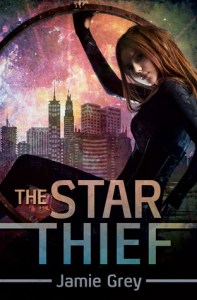 ‘Blood splattered like fireworks, turning the cement crimson and filling the air with iron and death. A head rolled past Renna’s feet, bouncing down the gentle incline.’ page 31

I found this in the New Adult section on Goodreads and when I bought it it said a new adult book… but I knew straight away that this wasn’t going to be anything like any of the other NA books I’ve read before… to start with it’s set in the future and in space! Awesome!

In a previous Top Ten post, my fellow blogger Paein tagged this as one to read soon because it sounded like a mix between Firefly and Guardians of the Galaxy and I can now confirm that yes it really is like that with a sprinkling of Dr Who tech speech…

In this book, we meet Renna as she breaks into a warehouse to steal a new piece of tech from a safe. She’s daring and clever and easily gets what she wants. But what she never intended to do was rescue a young boy in the process. She finds out that rescuing him has consequences. Huge Galaxy Saving Mission consequences. Renna finds herself teaming up with a secret military faction who have been trying to throw her arse in jail for years. And gets the shock of her life as a ghost from her past, Captain Finn/Hunter, takes command.

Renna was an amazing main character. She was ballsy and sarcastic in a laugh out loud funny way! She was strong and confident and this showed in how easily she could manipulate and stand-up to the men around her.  Some of my favourite lines in this book were sarcastic come-backs that she’d throw out there…

‘I don’t mind you on top, darling. It’s when you start pushing me around that we’ll have a problem.’ p.97

The romance was perfect, a great balance of angst and sexual tension. And of course sparks fly when they finally get together. But while the romance was there it wasn’t the basis for the whole story. There was fighting, mystery, sabotage, a galaxy saving quest… it was just mind-blowingly great!