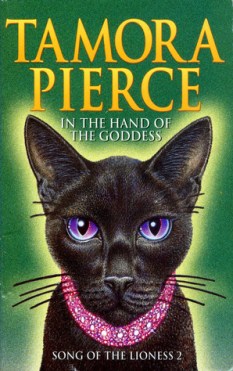 “You didn’t kill him. He would have killed you, but you didn’t kill him.”
“So? He was stupid. If I killed everyone who was stupid, I wouldn’t have time to sleep.”
Title: In the Hand of the Goddess
Author: Tamora Pierce
Book: 2 of the Song of the Lioness Quartet
Genre: Fantasy
Found: Library
Rating: 5 voodoos

“I don’t want to fall in love. I just want to be a warrior maiden.”
Still disguised as a boy, Alanna becomes a squire to none other than the prince of the realm. Prince Jonathan is not only Alanna’s liege lord, he is also her best friend — and one of the few who knows the secret of her true identity. But when a mysterious sorcerer threatens the prince’s life, it will take all of Alanna’s skill, strength, and magical power to protect him — even at the risk of revealing who she really is…Filled with swords and sorcery, adventure and intrigue, good and evil, Alanna’s second adventure continues the saga of a girl who dares to follow her dreams — and the magical destiny that awaits her.
-Goodreads

.
The second book covers the second half of Alanna’s training and in it we start to see her become a little more comfortable with herself. She’s older and suddenly the stakes are higher, Tortall is going to war and something sinister is going on.
This was once my favourite book of the series, it brings in the romance! But my views of these books have changed over the years as I’ve grown and it’s now second place to 1 and 4 jointly. She’s still young in this book, still growing and finding herself and she’s getting so much closer to her dream of adventuring but she’s got a few more obstacles to sort out first before she can leave the prince and her friends to fend for themselves.