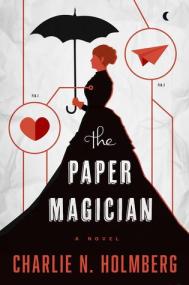 “Faith is a very personal thing, really. Just because you don’t meet with a group of people once a week who believe everything exactly the way you do doesn’t mean you don’t believe in something.”

One of the most remarkable, imaginative, and charming fantasy debut novels in years, Charlie N. Holmberg’s The Paper Magicianis an extraordinary adventure both dark and whimsical that will delight readers of all ages.

Ceony Twill arrives at the cottage of Magician Emery Thane with a broken heart. Having graduated at the top of her class from the Tagis Praff School for the Magically Inclined, Ceony is assigned an apprenticeship in paper magic despite her dreams of bespelling metal. And once she’s bonded to paper, that will be her only magic…forever.

Yet the spells Ceony learns under the strange yet kind Thane turn out to be more marvelous than she could have ever imagined—animating paper creatures, bringing stories to life via ghostly images, even reading fortunes. But as she discovers these wonders, Ceony also learns of the extraordinary dangers of forbidden magic.

An Excisioner—a practitioner of dark, flesh magic—invades the cottage and rips Thane’s heart from his chest. To save her teacher’s life, Ceony must face the evil magician and embark on an unbelievable adventure that will take her into the chambers of Thane’s still-beating heart—and reveal the very soul of the man.

This book has had it ups and downs.
The start of the book was interesting, having never read something like it before, magic is between someone and a man made object. Once you’re bound to the item that is the only one that you have power over. Ceony wanted to be a Smelter – a metal magician, able to enchant bullets and jewelry – but due to the lack of Folders – paper magicians – she’s had to bond to paper. She’s under the impression that there’s no power in paper. Foolish girl! She soon realises there’s more power than she thought, but I’m thinking she still doesn’t quite realise how powerful it can be!
I was somewhat annoyed with her attitude towards paper to start, but she soon changed her mind a little. The story dropped off a little at the start of her adventure and to keep my interest I skimmed it until it picked up again. There were a few more dips and it ended on a higher note.

Originally unsure, I do think I’ll continue on with the series.