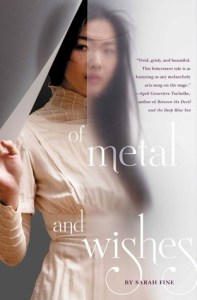 ‘A month ago my life changed forever. Now, instead of living in a warm cottage with a lovely garden, I live on a factory compound… Instead of embroidering silk, I embroider skin.’ p.2

There are whispers of a ghost in the slaughterhouse where sixteen-year-old Wen assists her father in his medical clinic—a ghost who grants wishes to those who need them most. When one of the Noor, men hired as cheap factory labor, humiliates Wen, she makes an impulsive wish of her own, and the Ghost grants it. Brutally.

Guilt-ridden, Wen befriends the Noor, including their outspoken leader, a young man named Melik. At the same time, she is lured by the mystery of the Ghost and learns he has been watching her … for a very long time.

As deadly accidents fuel tensions within the factory, Wen must confront her growing feelings for Melik, who is enraged at the sadistic factory bosses and the prejudice faced by his people at the hand of Wen’s, and her need to appease the Ghost, who is determined to protect her against any threat—real or imagined. She must decide whom she can trust, because as her heart is torn, the factory is exploding around her … and she might go down with it.

Of Metal and Wishes is a haunting, poignant rendition of The Phantom of the Opera.

Sarah Fine’s has a beautifully creepy touch when she writes, and it totally works for this retelling. I love that it was set in a slaughter house and had Eastern cultural aspects as it made everything seem unnatural and eerie.
Wen was a rather naive character and as a result got herself into quite a lot of trouble, sometime unnecessarily. Usually this would have annoyed me but surprisingly I still really liked her and I was seething at the bad things that happened to her.

Obviously, like in Phantom of the Opera, there is the man that Wen loves and a man who loves Wen. And gosh did I love both of them! Melik was the quiet, intense foreigner and Bo was the demanding but shy, masked stranger that had a ghost-like behavior. You know who you want her to end up with but you feel so much for the other guy. This romance is wistful and believable and so touching.

Some aspects of the story were a little gruesome. I’m talking both in a gorey, machines ripping into flesh, gruesome and a men trying to take advantage of girls sexually, gruesome, way so if you’re easily squeemish then I would advice avoiding this novel but if you have a strong stomach this book is amazing.

I love it and really feel that Sarah Fines has developed an amazing style of writing.

When I originally bought this is was a stand-alone book but I am so excited to see that it has been made into a series. I can’t wait for August 2015 and the release of Of Dreams and Rust!!

2 comments on “Review: Of Metal and Wishes”