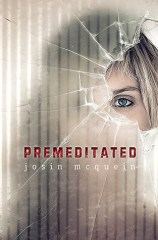 “Maybe it was me, but knowing Tabs now possessed the skills to conceal arsenic at will didnt make me want to be her official food taster.” – page 108

Dinah’s cousin (sister) attempted to kill herself and Dinah’s found out what caused this out of character act from her favourite family member. Desperate to set right something that would never have happened had her mother not forced her to move away, Dinah hunted out and found Claire’s diary. Instead of crying she made a plan. She’s bleached the dye from her hair and removed her piercings, swapping blacks and purples for pastels and plaid. She’s going under cover in the prestigious private school her cousin should be attending. She’s going to find the boy who broke her cousin and she’s going to systematically tear his life down around his ears. With help from her non-private school friends, she’s going to leave him as broken as he left her Claire.

I was so excited that I pre ordered this one, amazon cancelled the order of course, because my item was unavailable and I had to re-order the library binding. Eugh.

So…I find reviewing this kind of book hard to do, I don’t want to give anything away. Half way through I had an epiphany and peeked at the end. DO NOT DO THIS! I was right and it messed my perception for the rest of the book up completely. I’ll never know if I’d have realised this fact out before it was revealed had I not done so. Would I have been convinced? Or would I have only theorised?
I felt it was well written, but I never felt the need to go back over the bits I skimmed to get through the drama faster (this is something I often do, sort of jumping a head then returning to read it more thoroughly to make sure I missed no important facts when I realise what I’m doing.)
I wish the ending would have been longer. Definitely a fan of happily ever after and less a fan of open endings. I know they’re for us to imagine our own HEA’s but I do…I really do! And I have better things to do than spend the next week living out each option in my mind. Honest….
But basically, this book brings to mind the saying ‘hell hath no fury like a woman scorned’. Sometimes though, it’s the sister figure you have to look out for.