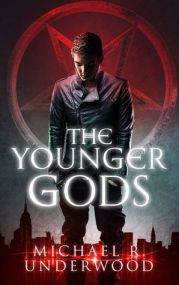 “I expected many things after I left my family: the loneliness of being separated from my roots, serious financial hardship and drastically fewer blood sacrifices with dinner.”

The first in a new series from the author of Geekomancy (pop culture urban fantasy) and Shield and Crocus (New Weird superhero fantasy).

Jacob Greene was a sweet boy raised by a loving, tight-knit family…of cultists. He always obeyed, and was so trusted by them that he was the one they sent out on their monthly supply run (food, medicine, pig fetuses, etc.).

Finding himself betrayed by them, he flees the family’s sequestered compound and enters the true unknown: college in New York City. It’s a very foreign place, the normal world and St. Mark’s University. But Jacob’s looking for a purpose in life, a way to understand people, and a future that breaks from his less-than-perfect past. However, when his estranged sister arrives in town to kick off the apocalypse, Jacob realizes that if he doesn’t gather allies and stop the family’s prophecy of destruction from coming true, nobody else will…

The first page gets you off to a good start, drawing you into the world of Jake as he tries to come to terms with things around him. Unfortunately I didn’t find this as humourous as I’d have expected to, I think that the main problems I had was with the main character and, as this is a first person recount, that therefore impacted on how I received the story.
I found him a little too long winded and though he knew little of pop culture, he knew a lot within the magical world that the reader didn’t, perhaps a little glimpse into his everyday life before would have been helpful, it felt as though I should have known more about what was going on about things that he mentioned than I did.

I enjoyed the idea of city wide ‘insider understandings’ and how there were these separate groups that knew of each other and helped out, but again a bit more of an explanation would have gone down well, where they all came from. Perhaps we learn more in the next book, certainly SOMEONE is going to need some explanations…

Kinda hoping Jake and Carter take their new surprise back to their dorm, that would be hilarious to explain.