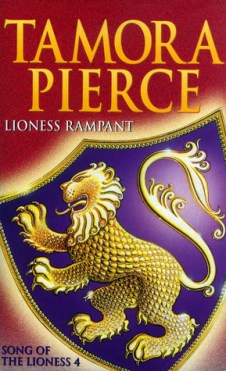 “You know something? There are sandstorms that strip man and horse and bury them — I’ve seen them. I saw bones piled higher than my head for the folly of a bad king and those who wanted his throne. I lived through a blizzard that froze every other living creature solid. Against those things, you’re only a man. I can deal with you.”

“I’m not sure I want to be a hero anymore.”
Having achieved her dream of becoming the first female knight errant, Alanna of Trebond is not sure what to do next. Perhaps being a knight errant is not all that Alanna needs….But Alanna must push her uncertainty aside when a new challenge arises. She must recover the Dominion Jewel, a legendary gem with enormous power for good — but only in the right hands. And she must work quickly. Tortall is in great danger, and Alanna’s archenemy, Duke Roger, is back — and more powerful than ever. In this final book of the Song of the Lioness quartet, Alanna discovers that she indeed has a future worthy of her mythic past — both as a warrior and as a woman.

I think, these days, that this is my favourite of the series. Alanna has grown into the woman it’s been hinting she’ll become through her actions in books one two and three. She has begin to come to terms with the fact that she can be both warrior and woman, both knight and shaman, in possession of both armor and dresses and she’s unapologetic about it.
She’s leaving legends behind her and she’s not even realising it, I think that’s my favourite part. She’s changing her world and she’s doing it just by being herself.

The book sort of falls into two parts. The fist, she rides off to do battle for the Dominion Jewel, braving war torn lands and fierce blizzards, picking up new friends along the way. But while she’s been gone, things have been falling apart at home, so she brings her new friends to meet her old and generally stirs things up a bit while sorting out what fell apart while she was gone.

Originally as a teen, I wasn’t happy with the direction that the end of this book took, but more recently I’ve decided worked out well, I’ve realised there’s no settling, I think I assumed that was so before.

This isn’t the end of Alanna though. we see her throughout all the other Tortall series.