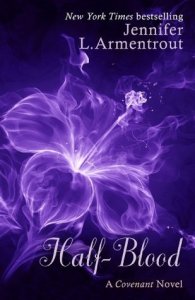 ‘Never in my life had I met someone so patient and tolerant of me. Gods know I’m annoying as hell, but Aiden treated me as if I were his equal.’ Loc 1549

The Hematoi descend from the unions of gods and mortals, and the children of two Hematoi—pure-bloods—have godlike powers. Children of Hematoi and mortals—well, not so much. Half-bloods only have two options: become trained Sentinels who hunt and kill daimons or become servants in the homes of the pures.

Seventeen-year-old Alexandria would rather risk her life fighting than waste it scrubbing toilets, but she may end up slumming it anyway. There are several rules that students at the Covenant must follow. Alex has problems with them all, but especially rule #1:

Relationships between pures and halfs are forbidden.

Unfortunately, she’s crushing hard on the totally hot pure-blood Aiden. But falling for Aiden isn’t her biggest problem—staying alive long enough to graduate the Covenant and become a Sentinel is. If she fails in her duty, she faces a future worse than death or slavery: being turned into a daimon, and being hunted by Aiden. And that would kind of suck.

I picked up Half-Blood after joining the Chapter 5 Book Club as it was their group read choice for November 2014. Many of my goodreads friends loved this book but others had complained about its parallels to Vampire Academy by Richelle Mead so I went into this with a cautious view.

At first I was a little astonished by how similar it was to Vampire Academy. It had a race of supernatural beings (with a stupidly long foreign name) that felt they were superior to their Half-blood relatives let alone the humans they lived alongside. It had a main character that had run away from the safety provided to people with supernatural abilities, who was captured within the first few pages and who was brought ‘Home’ by a hot warrior guy who she blatantly fancied but was forbidden to ever have a thing with due to rules set up about relationships between races.

Yes this had alarm-bells ringing in my head as everything seemed so familiar but in the end the differences in the story overcame the similarities and kept me reading. While VA was about a form of Vampire race, Half-Blood was about the off-spring of Greek Gods, while VA felt more set in a school environment, Half-Blood felt more like a training facility, and while Rose fell for the stern and Russian military beast that was the hotty Dimitri, Alex fell for the kind, quiet and gentle (yet still strong) Aiden. The similarities end around 35% and the rest of the story was great! I loved the whole mother-daughter aspect and I loved that you couldn’t figure out who to trust… I’m still not sure!

I wasn’t totally taken with Alex to start with as I found her soooo whiney! I couldn’t understand how she could be so scared of becoming a brainless slave one minute and then the next minute do ridiculously stupid things that she knew would leave her uncle with no choice but to send her into service. It was infuriating.

But I loved Aiden and I eventually started to like Alex and the way they interacted with each other. I also love Seth. I can see a stupid love-triangle coming later in the series but I don’t care cos it makes sense. She’s destined to be with Seth but her heart loves Aiden… This is like Vampire Diaries all over again!!! I don’t know whether I want her to fight her destiny or not lol.

In the end, I just want to say, Yes, I loved Vampire Academy but I also love Half-Blood and I will definitely read the rest of the series.