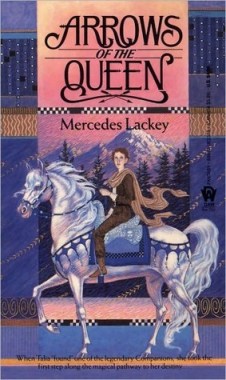 “Yes—at last—you. I choose you. Out of all the world, out of all the seeking, I have found you, young sister of my heart! You are mine and I am yours—and never again will there be loneliness— “ - page 24

A KINGDOM IMPERILED!
Chosen by the Companion Rolan, a mystical horse-like being with powers beyond imagining, Talia, once a run-away, has now become a trainee Herald, destined to become one of the Queen’s own elite guard. For Talia has certain awakening talents of the mind that only a Companion like Rolan can truly sense.
But as Talia struggles to master her unique abilities, time is running out. For conspiracy is brewing in Valdemar, a deadly treason which could destroy Queen and kingdom. Opposed by unknown enemies capable of both diabolical magic and treacherous assassination, the Queen must turn to Talia and the Heralds for aid in protecting the realm and insuring the future of the Queen’s heir, a child already in danger of becoming be-spelled by the Queen’s own foes!
-Goodreads

This was the fist Mercedes Lackey book I read, and it was recommended by amazon. To be honest, the description on amazon was feeble and what tipped me to actually buy it was because the year it was published was the year I was born, but I’m really glad I did! This is the first of a trilogy that belongs to a wider storyline of over 30 books.Though currently this is 20th chronologically (6 new ones have recently been added in the middle!) it was the first published and the first I started with. I never know if it’s better to read published order or chronological order. However, within this world I felt the very first set wasn’t as interesting (though the second set and the following stand alone were far more so) so I’m glad in this instance I at least started off published date wise and would certainly recommend others do so.In these books Mercedes Lackey has created an amazingly complex and beautifully in-depth world as well as individual and strong characters. I love this world and it’s structure and so I love this book because it was my doorway.

This book is about a girl who runs from marriage and falls into the life she’s always dreamed of; being a Herald, one of the Queens special forces that protect Valdemar and deliver justice where justice is needed. But it’s not all sunshine and butterflies, because if she survives her training, she’ll be a very powerful person and many people don’t want her, or anyone, to succeed. Obstacles seem to just be everywhere.
I do wonder how many instances within this book were allowed to happen, to any Chosen, not just specifically her (though, she’s desperately needed), but then I believe that is part of the point; things have become very bad which is why she’s so badly needed.

If I were to choose a fictional world to live in, I would choose this one. Though the lives of the Heralds are always dangerous and rarely long lived, they have such a bond with their Companions and such a wonderful . They have a form of soulmates that is rather beautiful and I love their name for (and concept of) Death. I have 4 books in this world yet to read and really I may just do a complete run through and re read them all!