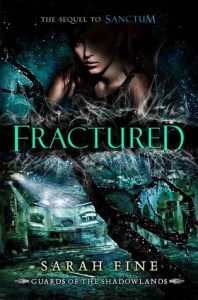 “We all make mistakes. And some of them are really bad,” I said in a husky voice, hearing the shower switch off upstairs. “But that doesn’t mean we’re allowed to use those mistakes as excuses. In fact, doing that makes them even worse.”

WARNING: May contain spoilers to Sanctum and definitely contains some spoilers for Fractured.

In the week since Lela returned to Rhode Island, local news has been dominated by chilling sightings of human-like creatures running on all fours. Lela knows there’s only one explanation: the Mazikin have arrived in the land of the living.

Needing to maintain the appearance of a normal life, Lela returns to Warwick High along with Malachi. At night they hunt for the Mazikin nest along with two new Guards. Jim, one rogue recruit, repeatedly challenges Lela’s authority. Lela struggles to keep all her Guards on the right side of the law, but their mistakes come at a terrible cost.

As one painful revelation follows another and the Mazikin start targeting those closest to her, Lela finds herself more vulnerable than ever. With an enemy determined to separate soul from body, Lela must decide how much she’s willing to sacrifice to protect those she loves.

I wasn’t as amazed by Fractured. When I was reading Sanctum, the things I enjoyed were the creepy, eerie descriptions of the Shadowlands and the confrontations between the guards and the Mazikin. While there were plenty of meetings with the Mazikin they weren’t as dramatically described as I wanted.

Fractured was based in our world rather than the Shadowland and it took me a while to get over this. I think the thing that helped the most was how clueless the 3 boys (Malachi, Henry and Jim) were – because two of them hadn’t been in our world for a very very long time and the other not at all, so things that we use every day, ie cell-phones, facebook etc, were daunting and confusing to them, (and hilarious for me).

I loved Jim, he was such a pain at the beginning as he was so arrogant and didn’t seem to care about anyone but himself but when he met Tegan he completely changed. He was so sweet and I loved how gentle and lovely he was towards her.

I didn’t really get to know Henry very much, but I think that was the point. He was mysterious and stealthy. He just disappeared into the dark and reappeared only when you needed him.

The thing that I didn’t like was the development in the romance. GOD it was infuriating! Lela got into a sticky situation and Malachi got all upset and disapproving and did something stupid himself, and as a result they ended up ‘ending’ their relationship for ‘safety reasons’. Load of bull if you ask me and all it did was make them distant with each other and pairing off with other people to make each other jealous. WHAT A LOAD OF CRAP! This is the reason for my lower rating. The only good thing out of it all was that her other love interest was Ian, and I loved him. He was so sweet and understanding and although he didn’t know what was going on, he never pestered her for answers, only grabbed his baseball bat and ran in like a hero. What a guy! *Swoons*

Any who, the ending left me with many unanswered questions so I will be reading the final part of The Guards of the Shadowlands but I hope that the romance settles down and that the creepy feeling comes back.