So this week I was taken along to a ‘bunting class’ where we made a bunting out of our chosen word. Having no idea what I was doing with the word I chose, I picked a rather long one…

So the kits we used were from Tando Creative, The price for a pack on the retail site, located here:

doesn’t show up unless logged in. On the trade site, located here:

it’s marked at £3.99. I don’t know if there is a minimum spend or if you need to be registered to access the trade site. Each pack contains 5 scalloped banners with punched holes and separate inner triangles.

So first we painted the scalloped edges of the outer triangles, I chose not to paint the whole thing to save time as I had double the amount of letters as everyone else. Though it’s acceptable to paint the whole of the front and even the back! 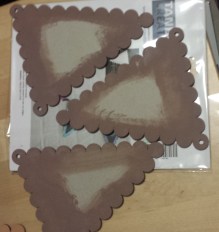 I gave the greyboard two coats of the paint (Which, by the way was a paint sampler from Homebase) and left it to dry and got on with painting my letters! These were wooden and I don’t know where they came from. The paint was also a sampler. 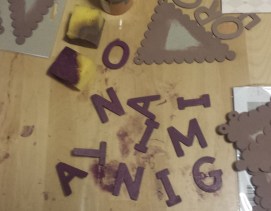 While they were drying I drew round the straight sided triangles on my chosen paper to cover them with, then stuck it down. Once that was done, I used an ink pad to darken the edges and stuck them to the dry larger triangles.

Then I stuck on my letters and used some rings to link them together. 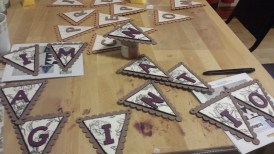 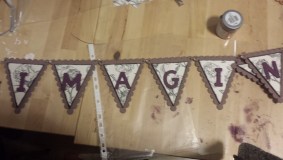 To be honest, I’m not sure I’m finished with it yet, but they have no other things available there that I was interested in using, Perhaps in the holidays I will have some time to dig out some of my own things and embellish it.