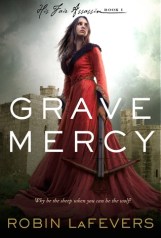 Why be the sheep, when you can be the wolf?

Seventeen-year-old Ismae escapes from the brutality of an arranged marriage into the sanctuary of the convent of St. Mortain, where the sisters still serve the gods of old. Here she learns that the god of Death Himself has blessed her with dangerous gifts—and a violent destiny. If she chooses to stay at the convent, she will be trained as an assassin and serve as a handmaiden to Death. To claim her new life, she must destroy the lives of others.
Ismae’s most important assignment takes her straight into the high court of Brittany—where she finds herself woefully under prepared—not only for the deadly games of intrigue and treason, but for the impossible choices she must make. For how can she deliver Death’s vengeance upon a target who, against her will, has stolen her heart?

.
The fist time I read this I gave it 5 voodoos. This time around, I completely agreed! Though the first time it seems, I found all the right moments to put it down, this time around it was all the wrong moments, requiring quick return though I have read it before.
.
I was originally drawn to this book because it was women assassins set in a time where women were thought of as nothing but ‘broodmares’ or if they are lucky, decoration. What I liked about it was that it wasn’t simply a case of going in and killing everybody, she  had an aim and she had to develop her skill set a little further to reach her end goal. The girl we meet at the start and the woman we have at the end are two vastly different people and it’s not only the Convent that has changed her. I think that Ismae is perhaps my favourite for this book, because of the changes she goes through, the discoveries that shape her, not only of herself and her parents, but of those around her too. She learns how to trust herself and that’s a powerful message. The Duchess is perhaps my second favourite, for she is just as strong as Ismae is, ppossibly stronger, because she is the age Ismae was when her story started and yet Anne has already weathered much.
.
My favourite part of the story is perhaps Ismae’s realisations on the battlefield and how they help her redefine herself and ultimately the path it leads her to. I cannot say down, for that is perhaps something that is touched upon in the next book. I also loved that the whole book was about her learning to think for herself. She was turned into a weapon and pointed in a direction, but after a blunder or so, she realised that she could be that weapon, simply following orders, or she could follow her instincts and her heart, given to her by Mortain Himself and deal with the situation to the best of her ability.
.
I would have liked to see more of Francois. Though he was a secondary character, his mother doted on him so much, I’d like to know exactly how he escaped knowledge of her plots, was he purposefully ignorant? I hope to hear more of him in the future and I was sad of the few we lost along the way.
.
There are two more books to go and Brittany is not yet safe, I hope we don’t loose anyone too important.