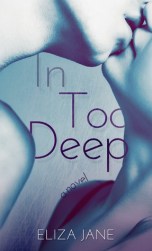 *An ARR was provided by Eliza Jane through the YA/NA Fanatics Group, on Goodreads, in exchange for an honest review*

Title: In Too Deep
Author: Eliza Jane
Book: 1 of In Too Deep
Genre: Young adult/New Adult
Found: Given as a ARR by the Author
Rating: 3 Voodoos

Secret computer hacker, Taylor, is given a scholarship at the prestigious Wilbrook Academy.  Wilbrook Academy is a school with only a handful of the most talented students. But what Taylor doesn’t know is they are not talented in the conventional school way… oh no, these teens are gifted in the art of espionage.

I knew I was going to love Colt as soon as I read the first line… “Where the hell are my boxers?”

Colt was the classic heart-breaker all cocky, self-assured and a complete womaniser. In the slightly clichéd way his co-star, Taylor, was the shy, but witty and intelligent female. There’s nothing wrong with clichéd though. And I was surprised by how much I loved watching this relationship grow.

I giggled at Taylor’s instant assessment and, as a result, complete rejection of Colts affections. I grinned at how crazy Colt got the more he tried and failed to impress Taylor. And I totally fell for him when he tried to change for her.  Yes this maybe the slightly overdone story of a ‘Bad Boy’ meets ‘Good Girl’, who eventually changes his ways because he loves her so much but I think this is one of the better and more believably written (if a little predictable) ones.

I was a little disappointed by the lack of spying and espionage. At one point they go on a case but I felt it seemed slightly staged, as if it was more for a way to push the two characters together, rather than an integral part of the story.

I supposed what I am saying is, I just didn’t see enough on the spy front to warrant it being an important part of the synopsis. This story could have been based in a zoo and I wouldn’t have cared as there was so little outside of the relationship development I wouldn’t have noticed.

Overall, I had a mixed reaction to this book, while I loved the characters, I felt let down by the lack of substance…