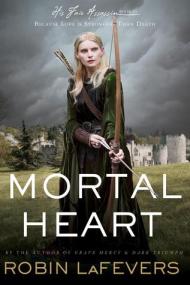 “Once, I was as much a part of both life and death that time had no meaning for me. My existence was as much about beginnings as it was about endings. People recognised that death was part of the journey, not some grim punishment meted out for one’s sins.” – 349
Title: Mortal Heart
Author: Robin LaFevers
Book: 3 of His Fair Assassin trilogy
Genre: YA, Historical Fantasy
Found: series
Rating: 5 Voodoos

Annith has watched her gifted sisters at the convent come and go, carrying out their dark dealings in the name of St. Mortain, patiently awaiting her own turn to serve Death. But her worst fears are realised when she discovers she is being groomed by the abbess as a Seeress, to be forever sequestered in the rock and stone womb of the convent. Feeling sorely betrayed, Annith decides to strike out on her own.
She has spent her whole life training to be an assassin. Just because the convent has changed its mind doesn’t mean she has…
-Goodreads

I nearly gave this 4.5 Voodoos, I don’t know, While I enjoyed it I felt that the change in role for Balthazaar at the end was a tiny bit disappointing, for if he doesn’t do that then who will? I am glad he got what his heart desired though. But in the end, I loved the message this book also carried; be yourself and follow your own path, not one that someone else has mapped out for you.

This book made me cry a whole bunch of times and I still think Annith should have told the Abbess exactly why she was so biddable all those years…but that’s just me. Death is still my favourite, we learn a little about his role within the Nine and how people started to fear him instead of worship him. I always find this idea sad, which is why I chose the quote I did for this post.

So, when I was messing around peeking at the end and checking this WAS a trilogy I read the authors note and discovered that these stories had some historical fact! Though true events have been crammed closer together and the details have been embellished, Anne and many of her people were real, which is really kind of amazing. Also, the end of the authors note may have said something about another story for another day..

Now that the story is complete I do look forward to reading them through once more sometime in the future, to try and spot things as I go. Now knowing Sybella’s past, for example, I’d like to re read her parts in Grave Mercy.