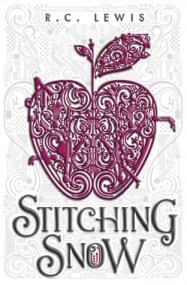 “I couldn’t forget the price of my freedom.
There had to be another choice.
I had to create one.
Do what needs doing, even if it terrifies you.” – page 162

Princess Snow is missing.
Her home planet is filled with violence and corruption at the hands of King Matthias and his wife as they attempt to punish her captors. The king will stop at nothing to get his beloved daughter back—but that’s assuming she wants to return at all.
Essie has grown used to being cold. Temperatures on the planet Thanda are always sub-zero, and she fills her days with coding and repairs for the seven loyal drones that run the local mines.
When a mysterious young man named Dane crash-lands near her home, Essie agrees to help the pilot repair his ship. But soon she realizes that Dane’s arrival was far from accidental, and she’s pulled into the heart of a war she’s risked everything to avoid. With the galaxy’s future—and her own—in jeopardy, Essie must choose who to trust in a fiery fight for survival.
-Goodreads

I’ve seen some comparison between this book and the Cinder series. Certainly this book reminded me of it too, but only at first and let me tell you why; This is a fairytale retelling in space, She’s a missing princess, She’s good with rebuilding things.
Basically, the similarities are coincidental. Space makes stuff look cool, just look at firefly, Snow is the original missing princess and lets be honest, what else is a good anywhere job for a girl in space? Right, mechanic/programmer. Basically, if you enjoyed Cinder, read this book (Though it sticks far far closer to the original tale than any of Cinder).
I did enjoy this book, but I feel so much more information could have been included, possibly even over two books. Everything seemed to happen pretty fast and I’d have loved to have seen some stuff from Dane’s point of view. I’d have liked an epilogue and possibly even more on Snow’s mother. I feel that perhaps this book is aimed at a younger audience for it was a nice simple story without all this extra gumph. Still, I’d like to see more in this world, perhaps even a few Novellas…
I loved the drones! The seven miner drones were quite clever. “There were seven, if you counted Dimwit.I never did.” haha, also, the subtly slipped in reference that they all originally came from Earth. See if you can spot it.
While I don’t feel like I wasn’t given important information, I thought that I could have been given more in quite a few places just to smooth things out, make it less hurried but that’s just a personal preference.
I’m interested to see what R.C.Lewis comes up with next!