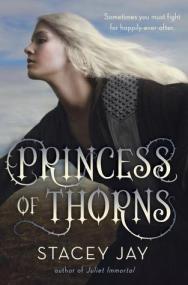 “But that’s what searching for love is like. You keep pushing on, breaking and being broken, until you find the person you want to hold safe, the only one who knows how to keep you in one piece.” – page 253

Game of Thrones meets the Grimm’s fairy tales in this twisted, fast-paced romantic fantasy-adventure about Sleeping Beauty’s daughter, a warrior princess who must fight to reclaim her throne.Though she looks like a mere mortal, Princess Aurora is a fairy blessed with enhanced strength, bravery, and mercy yet cursed to destroy the free will of any male who kisses her. Disguised as a boy, she enlists the help of the handsome but also cursed Prince Niklaas to fight legions of evil and free her brother from the ogre queen who stole Aurora’s throne ten years ago.Will Aurora triumph over evil and reach her brother before it’s too late? Can Aurora and Niklaas break the curses that will otherwise forever keep them from finding their one true love?
-goodreads

I didn’t realise this was by the same author as Of Beast and Beauty right off. I mean, when I originally pre-ordered it I probably did, but I’ve had time to forget since then. First I thought what I didn’t like so much about it was sort of the same that I’d liked about Of Beast and Beauty, that the romance wasn’t centre stage. But on closer thought, it was more likely that it was because these guys were both idiots. I mean really!
I liked that we got to see both points of view between the two and though it was annoying at first, it was informative seeing the queen’s side too. I wasn’t too impressed that they renamed Sleeping Beauty and gave her name to her daughter, but well, ok. I think my favourite was Niklaas, though he was somewhat idiotic too. Really, they should have just talked! But I can’t really rant, I’m not very good at saying things either.
I sort of crammed the ending in before bed, but ended up going back over it all and changing my rating for the better. Why? Because there are some very good paragraphs in the last few pages. Maybe they just strike me because of things I’ve been thinking of at the moment, but I liked them. Also, I’m in a romance mood right now and if I hadn’t been then I’d have been giving it 4 voodoos anyway.
I also loved the descriptions of the beards. Not something I’ve ever read in a book ever, especially when in reference to the studly main man. It was just perfect. It felt like there was a little snow white mixed in with this story, the evil step-mother and so forth, as well as Red Riding Hood and Rapunzel. I wonder if they’ll get their own stories too?
And once again, my usual complaint; more at the end! It’s all well and good getting to the happily ever after, but what next? We could have at least gotten up to his sister’s arrival and seen her take on things. Also, a little more of Jor would have been nice. Was he anything like Aurora?