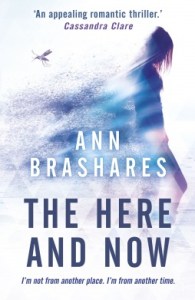 ‘How can you fix anything if you can’t change anything?’ Loc 661

Thrilling, exhilarating, haunting and heartbreaking, The Here and Now is a twenty-first-century take of an impossible romance.

Never reveal where you’re from.Never be intimate with anyone outside the community.And never interfere with history.

Seventeen-year-old Prenna James emigrated to New York when she was twelve. But Prenna didn’t come from a different country, she came from a different time – a future where a mosquito-borne illness has mutated into a pandemic, killing millions and leaving the world in ruins.

Prenna and the others who escaped to the present day must follow a strict set of rules. Prenna does as she’s told, believing she can help prevent the plague that will one day ravage the earth and take the lives of her younger brothers. But everything changes when she falls for Ethan.

She might be able to save the world … if she lets go of the one thing she’s found to hold on to.

I was so excited when I read that this was a young adult book that had dystopian and time-traveling aspects. I must admit this is my first time-travel novel and I was pleased that all the usual finicky time-traveller issues were sort of answered. Prenna and her people from the future have traveled back to 2010 to escape the death and impending demise of Earth. (I loved that this future world was so scarily likely. The idea that we ruin the Earth through a combination of consumption, global warming and disease mutation). But while the elders say they have returned to prevent the future from happening, to Prenna, it seems they are just hiding in the past. I always wonder with time-travel books that if you change something in the past to make things better in the future, then, would you still have traveled back in time to change events? Well this book clearly asks and answers this question and I think that is one of the reasons I enjoyed this books so much.

I think Prenna was a great character, she always seemed to ask the right questions at the right time for me and she was afraid but still willing to do something when needed. This made her realistic and easy to like. Ethan on the other hand seemed to be the character that was abnormally useful. One minute he was a normal teenage boy who needed help with his Physics work. The next minute he was hacking and programing servers, attaching trackers to Prenna’s shoe so that he could find her again just before she is taken by Mr Roberts and he was also someone who suddenly has a hand-held glass cutter and ability to use it efficiently so he can rescue her. He was just too much the perfect guy, always able to do everything and as a result I didn’t enjoy their romance as much as I think I would have. I found it strange that Prenna’s dad could know so much about the exact day that would change their future into the horrendous death zone that it was. It seemed to tidy and easy. I think really it would be more likely that a series of events would cause their future not one specific event. And I really didn’t understand why Prenna and Ethan would find all the information they would need to fix everything, in one box and then decide, oh good, well we have three days, lets go to the beach and play in the sea.

I didn’t think the other characters in the book got enough time to become either likeable or hate-able in the end, which was a shame because I think Mr. Robert and the other council members could have made brilliant villiains, if they had a little bit more of a role in the story. I also think that there would have been more emotion with Ben Kanobi if he had had more interaction with Prenna, but I do understand why this had to be.

In the end I enjoyed the story as it had a lot of interesting ideas but at no point did I feel that it explored them enough before conveniently solving then. I would have liked a little bit more suspense. If this does become a series I would quite like to see where it goes as I feel there are so many more possible story lines that could be explored.

3 comments on “Review: The Here and Now”