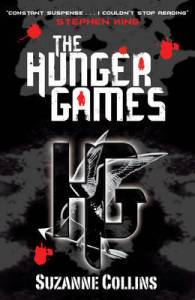 This is the original review that I posted in April 2012 on Goodreads:

I bought this after seeing the trailer for the film, I had previously seen the book but never considered it as I heard it was similar to Battle Royale.

I’m glad I read it before the film as I liked the characterization of Katniss and Peeta and always find films lack the subtle touches a book has. I thought the twists and turns of the plot were a little obvious but they were written well and had the ability to make me really care what happened to Katniss and Peeta.

I read one review that criticized Suzanne Collins lack of description. I don’t know whether the lack of description was intentional or not but it gave me two impressions, one that Suzanne Collins was allowing the reader free rein to imagine things their own way, (which I kinda liked)and two, that the lack of indepth description reflected Katniss. A girl who has had no real childhood wouldn’t have a great imagination and so her thoughts would be very frank.

I still agree with this review and I have since seen the film. The Hunger Games was my least favourite of the films, (of the series so far) but only because I watched it so soon after reading the book. I find that when you have the book so fresh in your mind, you are bound to notice those little details that the director has had to change in order to make it feasible for screen. I find the friendship between Katniss and Rue so sweet. And I actually liked Gale a lot better in the film than the book, perhaps because I don’t see the chemistry between him and Katniss as being as strong in the film. It was hard to like Gale in the book because I saw him as getting in the way of Katniss and Peeta.

Please let us know what you think of the book or the film! I’d love to hear how you found the comparison.