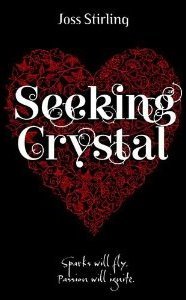 “Xavier, you have given me more grey hairs than all my sons put together.’ Saul frowned, then corrected himself. ‘To be fair, you and Zed. Just try not to add to them tonight.”

Crystal Brook has always been the dud Savant in her family; paranormal powers just aren’t her thing. Dropping out of school with a clutch of ‘E’ grades and no future, she lives in the shadow of her high-flying sister Diamond. On a trip to Denver, a chance encounter with the dashing Benedict brothers leaves Diamond head over heels in love and engaged to be married. Crystal, on the other hand, is unimpressed by their charms . . . in fact no boy can annoy her as much as Xav Benedict! Back in Venice, their families assemble for Diamond’s wedding and a powerful enemy seizes the opportunity to attack. Crystal and Xav must join forces to save their loved-ones, unlocking a secret that, until now, has lain deeply buried . . .

I just love this series. I love Joss Stirling’s portrayal of family love and endurance. It doesn’t matter what life throws at the Benedict family, they are convinced that love can concur all, and in this book you really need to hold onto that belief as Joss Stirling, throws in a doozy of a storyline that leave the Benedict men with a possible future without their Soulfinders!

Two Benedict brothers find their Soulfinders in this book, Trace and (my favourite brother) Xav.

The main character is Crystal the youngest daughter of a large Savant family. While all her brothers and sisters have an amazing Savant gift – such as Diamond who can influence peoples emotions, so works as a peacemaker – Crystal doesn’t seem to have a gift, well she does but her’s seems pointless in comparison. She can find things, you know like lost keys etc. But Crystal feels she’s a dud within her Savant family as she is unable to use telepathy, the main benefit of being a Savant. If she tries. She throws up. And if she can’t use telepathy how will she ever know her Soulfinder?

The only complaint I have about this new installment was the childish approach to Diamond (Crystal’s big sister) and Trace’s relationship. It was very one dimensional and unrealistic and as a result actually made me cringe in places! It just lacked the depth that I would have expected. They met, they fell instantly in love, and started planning their wedding! Wow, come on…. seriously? And annoyingly this seemed to be the focal point of the first half of the book. We watch all this from Crystal point of view. Which is the only thing that made it bearable, but also may explain the flatness that I experienced. I wish we’d got onto Crystal and Xav’s storyline quicker because that was adorable. Again there were a few moments where I wish there had been a bit more explanation. Such as when Crystal finally unlocked her ‘Skill’. (I’m still no clear on how this happened) as this was the moment that Xav and Crystal finally discover their bond and as I was so confused I felt I didn’t really get the whole Awwwww factor!

As usual there is a bad guy to defeat and a mystery to solve and this was amazing. I love it when all the Benedict’s band together to fight crime. They always have each others backs.

Overall a little childish in places but it’s a good read either way. And, if you love the Benedict’s as much as I do, then you won’t be disappointed.