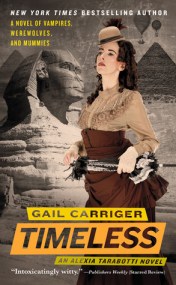 “[Biffy] had once described [Lady Maccon] to a colleague as the type of female who was born a grande dame. Everyone and everything had a proper place or she would see they were put into one of her own devising.” – page 87

Alexia Tarabotti, Lady Maccon, has settled into domestic bliss. Of course, being Alexia, such bliss involves integrating werewolves into London High society, living in a vampire’s second best closet, and coping with a precocious toddler who is prone to turning supernatural willy-nilly. Even Ivy Tunstell’s acting troupe’s latest play, disastrous to say the least, cannot put a dampener on Alexia’s enjoyment of her new London lifestyle.Until, that is, she receives a summons from Alexandria that cannot be ignored. With husband, child and Tunstells in tow, Alexia boards a steamer to cross the Mediterranean. But Egypt may hold more mysteries than even the indomitable Lady Maccon can handle. What does the vampire Queen of the Alexandria Hive really want from her? Why is the God-Breaker Plague suddenly expanding? And how has Ivy Tunstell suddenly become the most popular actress in all the British Empire?
-Goodreads

Well, I do think the reason I put the book down for so long was because it was perhaps a little too much steampunk london in one go. I slipped right back in again however when I picked it up again and now I want more! May he just pre-ordered the first of Prudence’s series. As always you are still left with questions, but as the world is continuing on in another series I can’t complain too much. I’m also not sure how many of my questions are down to archaeological interest too. The burning one I find, is to do with Floote’s timing. How?!
I believe my favourite has to be Biffy. The poor guy has had a rough time of it and from the way things were going, it’s not going to get much better, but he’s had some personal training now and he’s got something to work towards and it’s all done him some good. I’m glad he’s so much better now, he wasn’t dealing too well and he seems to have found himself again. I hope we see him and his story’s – not exactly conclusion, but if you read this book you’ll get what I mean – in the Prudence books. And while he threatened a certain despicable young woman, we didn’t see this come about. What did the Lord and Lady think of it all?
I think that, having recently seen a video about the Pharaoh Hatshepsut and there for knowing who she was before she cropped up in this book actually helped too, if I hadn’t have known I may have been less interested possibly but certainly I wouldn’t have understood what wasn’t explained in the book. For those of you who don’t know, she was the head wife when the previous Pharaoh died and started as a Regent for her stepson but was later made a full Pharaoh, not a Queen. This upset a few people and roughly 20 years after her death someone tried to erase her from history. Her statues were smashed and her name chiselled off things. Of course, her tomb still exists, but the wall paintings in there were painted under her direction…
But back to the book at hand. A nice round up, even if it doesn’t feel like a round up at all. (For example, what was that past society about in Italy which she discovered when she went to investigate the Templers?!) As always, an extra chapter would have been nice to tie everything up neatly. I like neat bows.