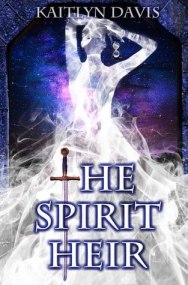 “Who are you?”
“I am the spirit dragon, guardian of all living things.” -14%
Title: The Spirit Heir
Author: Kaitlyn Davis
Book: 2 of A Dance of Dragons
Genre: fantasy
Found: Series
Rating:  Voodoos

From bestselling author Kaitlyn Davis comes the second book in the thrilling A Dance of Dragons series—perfect for fans of Throne of Glass, Graceling, and Game of Thrones!
Drenched in darkness and surrounded by the echo of screams, Jinji waits deep in the dungeons of Rayfort, haunted by the memory of the knife stabbing Rhen, plagued by a foreign voice whispering through her mind. A few floors above, Rhen rests trapped in a coma, about to wake to a changed world—a world where his best friend is a woman, his nephew is the king, and an enemy army surrounds him on all sides.
But human wars are insignificant compared to the darkness gathering unseen. Memories of lives she never lived flash through Jinji’s thoughts, hinting at a past that cannot be repeated. A mysterious phantom visits Rhen, carrying cryptic messages of the future. And somewhere out there, the shadow continues to lurk in silence.
Startled by their altered relationship and tempted by new feelings, Rhen and Jinji must find a way to work together. The fate of humanity rests on their shoulders and the real battle has only just begun…
-Goodreads

I was desperate to read this one after the ending of The Shadow Soul but when I got to the end I was so disappointed. They were doing so well! But they finally fell into the second-book trap. Y’know, where they’re a couple but they’re not because they’re too focused on their personal issues instead of helping each other. And this inevitably forms a rift and the world ends and yeah, I hate that. AND just when the dragons were actually getting involved!
I really enjoyed the book till that point and honestly that’s the only thing I found wrong with it, so if that sort of thing doesn’t bother you, this book will be perfect. The character development was through and the world building…well, having read the first book and both novella’s I felt far more knowledgeable about it all. The great mystery and the past/future repeat were fascinating too, again however, brought about BY NOT TALKING!! Or listening. Or any other important normal function. Are these book patterns why people don’t talk and listen or are they supposed to make people so frustrated that they DO talk and listen?
While reading this book I was frantically searching for a release date for the next book, I even signed up to the alert news letter. but the older I get the less time I have for stories that do this. So I pay just have to pass on the rest of the series. We’ll see when book 3 comes out.