A lovely Secret Santa Christmas Gift, it would be silly not to include it as a Make It!

I was concerned it would be a little difficult but actually when I got down to it, it was so simple! Everything you need comes in the box: Shea Butter, Coconut oil, Bees wax (smells so nice!) Almond and Calendula oil, Strawberry flavouring and 5 little screw top tins. You put the solids into a bowl and melt them over a saucepan of water or you leave them on the side of a conveniently placed aga… 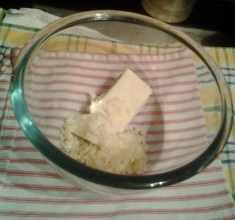 I may have become somewhat impatient and put it IN the aga, the beeswax takes some time to melt! This isn’t recommended, but it doesn’t seem to have adversely affected the lip balm. Next you have to add the liquid oil, mix it together and then add the flavouring. I put it back in to melt again as the liquids were cool enough to start the whole thing to solidifying. The mix also left a coating on all the cutlery I used as that too was cool. Then I spooned it into the 5 tubs. I had to put them on the aga to melt again, because they solidified too fast and became a little lumpy.Then I put them in the fridge to set them over night and that was it. It’s a nice conditioning balm and it smells sooo good! Love the smell of bees wax. I’ll definitely do this again!