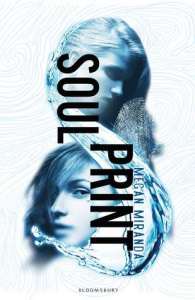 ‘Most souls are free of their pasts. Of their crimes and transgressions, their love and hate. Because a soul has no memory, and that’s a scientific fact.

Still, most people agree it’s better not to find out who you once were. And if you do find out, it’s best to keep that knowledge to yourself. Because while the soul has no memory, the world does, and that is usually enough.’ Loc 70

Alina Chase has spent her entire life in confinement. With the science of soul-printing now a reality, she is ‘protected’ for her own safety (and the safety of others) because her soul has done terrible things … or so she’s told. When Alina finally breaks out of prison, helped by a group of people with unclear motives, she begins to uncover clues left by her past life that only she can decipher. And she may not be as innocent as she once believed. Can Alina change her future, or is she fated to repeat her past and face the consequences?

There was soooo much depth to this story! I just loved it.

Soulprint is based around the idea of reincarnation and that your soul can be traced, like DNA. Scientists claim that there is a 0.8 out of 1.0 chance that, if your soul committed a crime in a previous life then, they are likely to commit a crime in the next. Wouldn’t it therefore, be a good idea to know who these people are?

Apparently, June (Alina’s previous self) and her lover Liam White then moved on to Blackmailing these evil soul’s. They were later hunted down and killed, but not before June declared that she would not stop, and she will continue this in her next life. It was (apparently) for this reason that Alina was systematically hunted out and confined. Because how could they let her get away with this again? But nothing is ever black and white is it???

See I told you, so much thought has gone into this storyline! I found that I just couldn’t put it down. It was terrifying that no matter what Alina did, she couldn’t escape the accusations that she was June. She made herself left handed so she wasn’t the same, that must be June’s soul being stubborn and when she waved at the cameras, well damn if that wasn’t June’s soul gloating. She just couldn’t win! But that wasn’t the whole of this story because most of this story is told while Alina is on the run. She escapes the island she’s confined too with the help of a girl, Casey, Casey’s brother, Cameron and an ex-guard Dominic, all of who have their own motivation to free Alina. The hunt for the truth and something-anything that will set them free, commences.

I loved Alina she was strong, brave and defiant to the end! She held true to her belief that her soul was her own. Cameron was so cute. He made a great love interest. Casey made a good ‘reluctant’ friend and Dominic… well Dominic was creepy and scared the crap out of me. I really enjoyed reading the development of the relationships between these characters and how the pressure of (re-)capture effected each of them differently.

I think there were only a couple of things that niggled away at me. One was the why Alina/June was confined and yet her accomplice, and the person who apparently did the hacking, Liam wasn’t! Why would that happen? And the other was the ending. It just seemed to easy to clean cut. All the answers were given to them without to much coercion or hassle.

Never-the-less I really enjoyed Soulprint. Megan Miranda has an amazing imagination. I may have to go and buy all her other books right now!