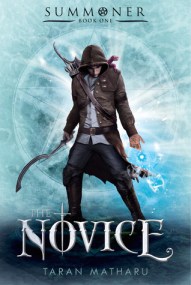 Enter an immersive fantasy world where one boy’s ability to summon demons will change the fate of an empire … Book 1 in the epic SUMMONER trilogy from Wattpad sensation Taran Matharu.

Fletcher was nothing more than a humble blacksmith’s apprentice, when a chance encounter leads to the discovery that he has the ability to summon demons from another world. Chased from his village for a crime he did not commit, he must travel with his demon to the Vocans Academy, where the gifted are trained in the art of summoning.

The academy will put Fletcher through a gauntlet of gruelling lessons, training him as a battlemage to fight in the Hominum Empire’s war against the savage orcs. Rubbing shoulders with the children of the most powerful nobles in the land, Fletcher must tread carefully. The power hungry Forsyth twins lurk in the shadows, plotting to further their family’s interests. Then there is Sylva, an elf who will do anything she can to forge an alliance between her people and Hominum, even if it means betraying her friends. Othello is the first ever dwarf at the academy, and his people have long been oppressed by Hominum’s rulers, which provokes tension amongst those he studies alongside

Fletcher will find himself caught in the middle of powerful forces, with nothing but his demon Ignatius to help him. As the pieces on the board manoeuvre for supremacy, Fletcher must decide where his loyalties lie. The fate of an empire is in his hands …

I had a few issues with this book to start with. I was under the assumption I was reading a YA book, but the writing style fit far more securely into the Teen category. Once I had that settled I got on a little better but I did find the writing a little raw, I don’t know how much of that is due to reading an ARC several months before publication and how much is due to the fact that this is a début novel for a younger writer. There is certainly potential there as the story was quite fascinating, if a little slow to get going and I intend to keep my eyes out for more from this author.

The world building was actually rather good and well thought out. There is currently a long list of questions I want answered that weren’t gaping holes in the plot which pretty much guarantees that I’ll be reading the next one. I desperately want to know who Fletcher is! And I’m secretly hoping that Ignatius has more secrets up his sleeve (sorry, snout) and that that extra, sort of flashing crystal means he may just pull a Toothless on us (cause that would be pretty amazing).

It’s been compared to a Harry Potter with Pokemon, but I would even say the way the demons and their summoners are is almost like the daemons of His Dark Materials trilogy by Philip Pullman. There is a bond there that no Pokemon and trainer could ever hope to match.

The characters could do with a little more building, especially as the plot gets more complex. They seemed a little flat and little seemed to happen to them as we waited for them to get to the big finale. While this is suitable for a younger audience, invariably an older one will come along too and just that tiny bit extra will keep them just as entertained as all the rest. I’d have liked to find out more about Ignatius, but I get the feeling he’ll be the star of book two. (Which isn’t even a mention on goodreads yet, dangit!)

This is a good clean adventure story, suitable for younger teens and maybe even some children.