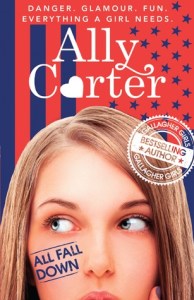 ’Part of having the world think you’re crazy means you always have to remind yourself of the truth.’

This is my Book by an Author I’ve Never Read choice for the 2015 Reading Challenge.

Grace can best be described as a daredevil, an Army brat, and a rebel. She is also the only granddaughter of perhaps the most powerful ambassador in the world and Grace has spent every summer of her childhood running across the roofs of Embassy Row.

Now, at age sixteen, she’s come back to stay – in order to solve the mystery of her mother’s death. In the process, she uncovers an international conspiracy of unsettling proportions, and must choose her friends and watch her foes carefully if she and the world are to be saved.

This is my first taste of Ally Carter, as I haven’t read any of her Gallagher Girls Series or her Heist Society Series, and as a first read this was thoroughly enjoyable. I found myself questioning everything. I was convinced that I knew what was going on from the beginning and yet at 70% I was being thrown through loops. Just like Grace (the main character) I couldn’t tell what was the truth and what was illusion/delusion!

Grace was an interesting main character. She had just returned, after three years away, to her Grandfathers home on Embassy Row, and was finding it difficult to settle back into the life expected of her as a political persons granddaughter. She was frequently bombarded with memories of her mothers death and when she sees the man she has been told never existed, the man who killed her mother, she starts to question everything she’s ever been told.

I can easily say that one of the best things about Ally Carter’s writing was her characterization of Grace. Grace came across as impulsive, troubled and in the end, broken. She never quite trusted herself and this, mixed with her erratic behavior made it easy for you as the reader, to also doubt her. I doubted the accuracy of her memories and her decisions, and I just loved how this made it so hard to figure out what was going on!

I liked the mix of secondary characters. Ms Chancellor was an odd one. I was suspicious of her from the get go. I found Noah to be really refreshing, its nice to have a guy not be a love interest but a friend, a real friend. And there was a very sexy Russian who made a couple of chivalrous appearances, just to give a little bit of a romantic touch! But this wasn’t the focus of the story at all.

To be honest it took me a while to get into All Fall Down. I found it a little slow at the beginning as there was A LOT of scene setting and introductions and it started to feel like the story would never get going! But when it finally did get going it was great! All I can add is that that ending is horrible! I hate massive cliffhangers and this one leaves you with the biggest hint at what may be round the corner but that’s it! I have no idea how I will be able to wait till 2016!