by Colleen Hoover and Tarryn Fisher 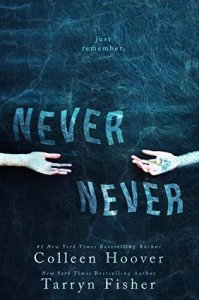 This is my Book You Can Finish In A Day choice for the 2015 Reading Challenge.

Damn this was such a little book of frustration!! I had no idea how I was ever going to decide on a rating. There were so many things I loved, and left me wanting to give it 4 voodoos, but then there were things that were just so infuriating that I only wanted to give it 3. In the end I chickened out and went for a 3.5.

Never Never is basically a story about two high school students who, one morning, suddenly can’t remember anyone. Not even themselves. After finding out their names, and noticing the same state of confusion in each other. They team up to go on the search for answers. What has happened to them, Why its happened to them and how to undo it. Well this is what they indeed to go in search of but sadly these questions are not answered in this book… Actually I’m not even sure what they found out. Other than that Charlie (the girl) wasn’t very nice but possibly because she came from a not so nice background, Silas (the boy) was a nice guy but did stupid things, possibly because he was provoke by Charlies attitude and oooh they have WICKED CHEMISTRY!!!

Well to start with, the cover is beautiful! And was easily the first thing that drew me to purchase Never Never. Although, now that I’ve read it, I’m not entirely sure what the water has to do with the story. If anyone can explain this for me that would be great.

I liked that this story successfully used a split Point of View. The fact that the chapters alternated between Charlie and Silas’s POV really worked. This is a technique I’ve seen used quite a few time and usually I find it unnecessary but here it was essential to helping you understand what these two characters were experiencing. Initially the voices seemed completely different but when both characters were spending a lot of time together, they were a little easy to muddle up.

I loved that this was so mysterious! I have no idea what was going on but something kept me reading and I can only think that it’s because I have this need to understand!

Eventually I loved how the story built up, but initially I did find it annoying because you just didn’t know ANYTHING! I think if the blurb had explained that the characters had lost their memories then I may not have been sooo confused and irritated.

In the end I think all of the above things were minor Yays! and Nah’s! In the end it was two things pulling me between 3 and 4 stars. On the 3 star side was the fact that literally NOTHING was explained in the end! and on the 4 star side, that romance… come on who could resist Silas’s determination to rekindle that fire that was obviously trying to burn between them. Just wow he was hot and totally besotted with Charlie! Sooo you see why I was so torn! I think this series needs some more investigation until I know whether this was just the most amazing set up for an epic romance mystery or just a ridiculously secretive start to an infuriatingly drawn out nothing.

Either way I’m in for book 2 which is out in May this year!