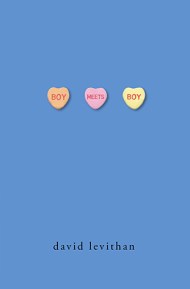 “Infinite Darlene doesn’t make the best first impression. She seems very full of herself. Which she is. It’s only after you get to know her better that you realise that somehow she’s managed to encompass all her friends within her own self-image, so that when she’s acting full of herself, she’s actually full of her close friends too.” – page 54/55

“There isn’t really a gay scene or a straight scene in our town. They all got mixed up a while back, which I think is for the best…And whether your heart is strictly ballroom or blue grass punk, the dace floors are open to whatever you gave to offer. This is my town.”
Meet Paul.
Gay his whole life and finding love is wonderful, confusing and heartbreaking as every other teenager in his high school.
Meet Paul’s friends:
Joni – His best friend.
His other best friend – Tony.
Infinite Darlene – homecoming queen AND star quarterback.
The ex-boyfriend who wont go away – Kyle.
And Noah – who changes everything.
-Book blurb

I chose to type out the book blurb instead of pasting the information given by Goodreads because they’re radically different. Had I read the description on Goodreads instead of the one on the back when I picked this book up to read it, I’d have put it back down again and moved on – it mentions far more of the plot that is perhaps necessary and mentions how Paul blows his chance with Noah and that he has to sort it, something that annoys me – where as the book blurb was more mysterious and generally more inviting.
.
I was rather annoyed with this book to start off with. I assumed it was a small town and that the attitude of the town was over the top (which is something I don’t like in LGBT books – over compensating doesn’t make the problem better, it just causes more problems. I want ones that are the same as all my other books, except the main character is NOT flailing about and the love interest just happens to be of the same gender. Please, if you know of any books like this, let me know!) and there was such a high percentage of gay/transgender people I found it false and I didn’t want it to be false. But after a while I got into the story and it bothered me less, because, while there were several LGBT people, there was plenty of others too.
.
I think that Infinite Darlene was my favourite character, which I find fascinating and is something I’m pleased with. As someone who has to relate things to how I see / feel about the world to understand, transgender is something I can’t empathise with and is therefore outside of my realm of understanding. She took some time to grow on me, but I loved how she was described and when she had an issue with her homecoming queen duties clashing with her quarterback duties Paul gave her the answer in a compromise for how to do both and while she is a transgender role model, she’s also a strong role model for girls. Not only is she of the habit of looking pretty and wearing dresses but she also kicks butt on the faux rugby pitch! It is possible and acceptable to be both.
.
Joni was my least favourite character, which I’m somewhat conflicted about as she was the only straight person in the main cast (a little reverse prejudice there maybe?) But I’m glad that there was a bisexual character as I feel that this is a person type that gets a lot of flack, I’ve heard people say that they should hurry and make up their minds which is ridiculous (I fully support their unintentional ability to love indiscriminately.)
.
Actually, sitting here thinking about it, this book is full of things I listed as things I hated in romance books. However the love triangles weren’t really triangles and the ‘split’ was a misunderstanding that gets sorted wonderfully. There was no undue drama and everything that happened developed each character. They were all different at the end.
.
It wasn’t till I was almost finished that I realised something. I don’t know what this book was set / written, though my copy was published in 2003 and there were no mobile phones! They were using the landlines and I didn’t even notice. It was nice and had a nostalgic feel. No Facebook and no sending text messages. It was all adorable notes and in person plan making. I think I miss those days.
.
.
.