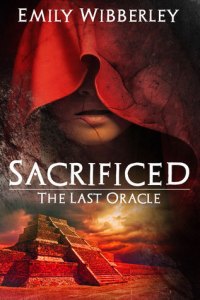 ‘Clio knew the funny thing about repulsion, though, – no matter how strong, it was never strong enough to stifle curiosity.’ Loc 3086

This is my A Book By A Female Author choice for the 2015 Reading Challenge.

Fifteen-year-old Clio should have never been the Oracle of Sheehan. That power is passed from mother to eldest daughter, and Clio is the youngest of four sisters. But when her entire family is murdered by Mannix, the king’s adviser, Clio is left all alone and heir to a power she never wanted and doesn’t understand.

Hunted by Mannix, Clio seeks refuge in a foreign city where oracles are absolutely forbidden. If she’s found out, she will be sacrificed atop its great pyramid.

Clio has no choice but to win the trust of Riece, an enemy warrior. Despite the growing feelings between them, Clio knows that if he finds out who she really is, he won’t hesitate to kill her.

Clio tries to hide her budding powers, but the visions she has of Mannix bringing a barbarian army into Sheehan torture her conscience. She alone has the strength and foresight to stop him, but only if she can embrace her destiny and sacrifice everything

Sacrificed surprised me. I don’t know why but I wasn’t expecting much when I came to read it. Perhaps it was because it had an amazing cover (I have been let down by amazing covers before), or possibly because the blurb sounded too intriguing and so full of adventure that it couldn’t possibly deliver the epic fantasy I envisaged (especially in a book that had less than 300 pages!) or perhaps it was just me being overly mean and seeing that it was self-published and thinking, that can only mean it’s not quite good enough… But I will eat my words because this book was all it promised and more.

I won’t say it’s completely without flaws because there are some, but what is there, is impressive. It was full of action, adventure, murder and romance and once I got into the story I just couldn’t put it down.

I was happy to find that it actually starts before the death of her family, as it gave me the chance to understand where she came from, how she felt about her family and the politics surrounding her Mother – The Oracle. I found the bit between the murder of her family and her travelling to Morek, to be a little lacking though. It seemed really short – I imagined it to be a great distance between the two cities but it seemed like it was supposed to be a few days walk? I’m not entirely sure as this was only a few pages and didn’t really work.

Throughout Sacrificed there is a lot missing in description of the environment – this is a completely new world and it would have been nice to have more detail. But I think that this was the only writing problem I found with the whole book. Although saying that, when Clio arrived at Morek there was a good amount of detail added to describe the city. If this kind of detail had been added throughout the book, then it would have been PERFECT!

I loved Clio’s strong and confident nature, and adored her when, even in her weakest moments, she wouldn’t let the men see it or help her. She was feisty and every problem that was thrown at her, she assessed and solved!

When Reice came along, OH MAN, did I swoon. The romance is perfect. It developed slowly, even though you could see it coming, and when they started to show their feeling towards each other, it was just so cute and made me feel all warm and fuzzy in side.

On the action adventure side of things, I was impressed that Emily Wibberley didn’t shy away from the gruesome details but fully described it so you felt like you were actually experiencing it! There were so many deaths and so many sword fights that I was just couldn’t help being completely engrossed in the story.

The only reason I deducted a star was because of the ending. This was the only part of the plot that disappointed me! I didn’t mind the hint of a love triangle, but that ending… It was just sooo cliched! Why couldn’t Clio have come up with a less dramatic way of ‘saving’ Reice! I do hate it when the characters have a big fall out at the end of book one. I don’t know what Emily has planned for book 2 but I really hope that that ending was necessary.

In the end I would say that this is a great debut novel and an impressive start to a series (even though it did lack a little on the world-building side of things). This is for anyone who loves an action-adventure romance. I can’t wait to see where this goes next! Please give me a copy lol.