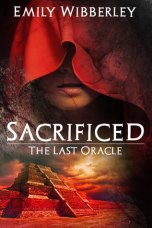 It’s hard living in the present when all you can see is the future.

Fifteen-year-old Clio should have never been the Oracle of Sheehan. That power is passed from mother to eldest daughter, and Clio is the youngest of four sisters. But when her entire family is murdered by Mannix, the king’s adviser, Clio is left all alone and heir to a power she never wanted and doesn’t understand. Hunted by Mannix, Clio seeks refuge in a foreign city where oracles are absolutely forbidden. If she’s found out, she will be sacrificed atop a great pyramid. Clio has no choice but to win the trust of Riece, an enemy warrior. Despite the growing feelings between them, Clio knows that if he finds out who she really is, he won’t hesitate to kill her.

Clio tries to hide her budding powers, but the visions she has of Mannix bringing a barbarian army into Sheehan torture her conscience. She alone has the strength and foresight to stop him, but only if she can embrace her destiny and sacrifice everything.

I really liked this story, despite it committing The Love Triangle AND The Separation sins. There were a few consistency errors I noticed that may have been cleared up before the book came out properly. Surprisingly though, these factors where not ALL that contributed to the loss of one voodoo. No, there was in fact a moment at the end I completely felt was unnecessary and it has to do with being unable to find someone whose fate I had thought was pretty clear cut. What the heck?

Clio was perhaps my favourite character. She was quite funny sometimes and didn’t flail around waiting to be rescued. She was given help and perhaps needed to be rescued some times, though that seemed to be more due to the fact that she was naive in the way of the world but she was at least attempting to get herself out of these situations and was pretty good at dealing with what was thrown at her. How she feels about things is well explained and is understandable from what we see of her life. Each one of her reactions has a reason and actually seemed to based in some form of logic. Perhaps sometimes flawed logic, but it all fit within her personality, it wasn’t simply happening because plot.

I found the book well written and fast paced. I did stay up a FAR too late reading it, but if you can’t do that in the holidays, when can you?! I also felt the character development was nicely rounded so I was quite surprised, when looking for ‘publisher’ for the information to accompany this post, I discovered there was none! I don’t know if that marks the failure of publishing houses (if approached) or if it just shows the low level of self published books I’ve come across but it gives me hope for the future.

I resented Riece when he first came along, because love triangle. Hate triangles. I especially resented how much I prefered him in the end, but I think that that may be to do with how little we learn of Derik and to do with how much Riece had to grow up within his life. However, I think that Clio chose the wrong way to save him in the end. While she had logic behind her, it wont stop him. I only hope he’s smart enough to see through to the reason why.

I’m left wondering how much of my appreciation for this book is because it reminded me of The Winners Trilogy (at least 1 & 2). there was one specific thing that reminded me of it with regards to the plot, that I wont be pointing out to you because it will spoil both series, but also, the attitude of the characters (though different on the surface, I feel this is more to do with personality) and the solidity of the story. As I’m already fully in love with the Winners Trilogy and I’m yet to read book 3, I feel that there is a high level of promise for the Last Oracle Trilogy and I can’t wait for book 2.

And I have to agree with Ms4Tune when she says in her review (found here: Ms4Tune’s review of Sacrificed ) that it would have been nice to have the same level of description found when describing Morek throughout the whole book.