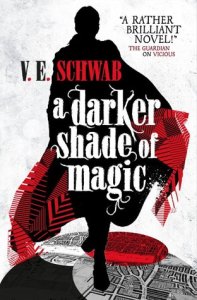 This is A Book about Magic choice for the 2015 Reading Challenge.

Kell is one of the last Travelers—rare magicians who choose a parallel universe to visit.

Grey London is dirty, boring, lacks magic, ruled by mad King George. Red London is where life and magic are revered, and the Maresh Dynasty presides over a flourishing empire. White London is ruled by whoever has murdered their way to the throne. People fight to control magic, and the magic fights back, draining the city to its very bones. Once there was Black London – but no one speaks of that now.

Officially, Kell is the Red Traveler, personal ambassador and adopted Prince of Red London, carrying the monthly correspondences between royals of each London. Unofficially, Kell smuggles for those willing to pay for even a glimpse of a world they’ll never see. This dangerous hobby sets him up for accidental treason. Fleeing into Grey London, Kell runs afoul of Delilah Bard, a cut-purse with lofty aspirations. She robs him, saves him from a dangerous enemy, then forces him to another world for her ‘proper adventure’.

But perilous magic is afoot, and treachery lurks at every turn. To save all of the worlds, Kell and Lila will first need to stay alive — trickier than they hoped.

It’s been a month now since I got my hands on a copy of this beauty! As I was only supposed to get a sneak peek (ie the first 150 pages) I was thoroughly surprised and over the moon when I (eventually) realised I had been given a full version. This was BLOODY BRILLIANT!!! This book was that good that, once I had started, I was so absorbed in the story that I just read and read, and it was a good few hours before I even stopped to consider that perhaps I had more than I should. I only reviewed the first 150 pages before as I didn’t think I should review the full version till after publication. But I don’t know how anyone else could cope with only reading 150 pages! I would have been pulling my hair out waiting for the rest of the book!

So what can I say about A Darker Shade of Magic. Well its complex, full of clever plot-twists, characters and layers… literally

The story is set in London, in fact, four completely different versions of London. Kell, the main character, is one of only two magical traveller’s (Antari) left, who can walk between the different versions. Kell has associated colours with the different London’s and so we know them simply as Grey London (a world very similar to ours, lacking in magic), Red London (a world full of life and magic, who believe magic should be respected), White London (a world with fading magic, who are ruthless and believe magic is power and will slit each others throats to possess it) and then there is Black London (a world totally eaten away by magic), no one goes there anymore.

There are many characters, some, only play fleeting roles, but others drop in and out. I got a little confused at the beginning with so many extra characters, in the three different London’s, but only for the first 20% or so.

Kell was a great main character but he wasn’t my favourite. He was interesting and kicked ass but he faded into the background, for me, when Lila (Delilah Bard) was around. She is a cross-dressing pirate. Yes SHE! She was amazing. She relied on no one, she lived on the streets, picking-pockets to keep herself alive, she was proud of her independence. But she also knew what was right and she couldn’t turn her back on anyone who needed her help, not even when she was heavily outnumbered or up against an opponent with better abilities than her. I loved her fierce and inquisitive nature. I can’t wait to see where her character goes next!

I found that I became really suspicious while reading this book. Its so hard to tell what is motivating the different characters, and what the significance of their point of view is. And yet I was always wrong! It was so refreshing to read a book that was totally unpredictable and as a result had me completely hooked.

So much thought has gone into A Darker Shade of Magic. Its all the little detailed back-stories and different points of view that make this totally out-there plot seem feasible and yet flow so well. But I’ll give you this little hint, don’t get to attached to any of the extraneous characters because V E Schwab isn’t afraid of killing anyone off!

A Darker Shade of Magic is a fast paced and intricate fantasy and as you can see the concept held between these pages was new and exciting. I can’t wait to see what will happen next!