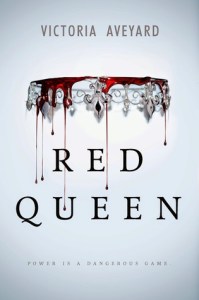 ‘Anyone can betray anyone’

This is my A Book With A Love-Triangle choice for the 2015 Reading Challenge.

Graceling meets The Selection in debut novelist Victoria Aveyard’s sweeping tale of seventeen-year-old Mare, a common girl whose once-latent magical power draws her into the dangerous intrigue of the king’s palace. Will her power save her or condemn her?

Mare Barrow’s world is divided by blood–those with common, Red blood serve the Silver- blooded elite, who are gifted with superhuman abilities. Mare is a Red, scraping by as a thief in a poor, rural village, until a twist of fate throws her in front of the Silver court. Before the king, princes, and all the nobles, she discovers she has an ability of her own.

To cover up this impossibility, the king forces her to play the role of a lost Silver princess and betroths her to one of his own sons. As Mare is drawn further into the Silver world, she risks everything and uses her new position to help the Scarlet Guard–a growing Red rebellion–even as her heart tugs her in an impossible direction. One wrong move can lead to her death, but in the dangerous game she plays, the only certainty is betrayal.

Gah, where to start… I guess by saying I’m a little disappointed. Red Queen, first came to my attention back in September 2014 on Goodreads. It sounds interesting and exciting and promised all the things that The Hunger Games had brought to us not so long ago. So in January I placed my pre-order and waited… not so patiently… for it to drop through my letterbox.

It wasn’t that Red Queen was bad, because, honestly I did enjoy it. It’s just that it didn’t bring anything new to the Young-Adult Science Fiction/Dystopian book world. It used all the usual techniques and elements I’ve seen before, and they work, just as well as they have in all the other books in this genre.

Red Queen had the classic Class divide, with the down-trodden and non-magical Red’s becoming restless with their lowly position in comparison to the Elite and all powerful Silver’s. They are apparently called Red’s and Silver’s because when they bleed this is the colour of their blood. It was the Silver’s who fought in the ring, showing off their skills to scare the Reds but I did find myself reminiscing about the Hunger Games because of this scenario.

All the way through you are aware that there is a war happening but it felt as though we were in a time-capsule because while I was aware that the red’s were being sent off to the front to fight, I got the impression it had been going on a long time but never really understood a time frame. More importantly I had no idea how they had found out that the Silver’s had powers to begin with and how they had segregated and enslaved the reds. This was a problem I also found with The Queen of the Tearlings.

Two of the most overused techniques from Young Adult literature popped up too. The oh so loved Love-Triangle and the Hateful-Pretty-Girl. Now I’m not to fussy about a love-triangle when it’s used appropriately and I think Red Queen tries very hard to implicate it well, but it slipped in places. It was hard to feel her love for both brothers as she seemed to dither around a lot. Through Kilorn in too and it started to feel like this girl didn’t know how to just have male friends. But overall I did enjoy the interaction between Mare and her three men. What I didn’t get was Evangeline’s hatred. Yes she was supposed to be a spiteful person but she seemed overly dramatic in her attitude towards Mare. Indifference would have sufficed.

I grew to like Mare as the book went on and I loved her family. Although I found her a little naive. She should have been more cautious with her moves because she throw her friends and family in the line of fire, here there and everywhere! Especially at the beginning. I wondered whether this was because the author was trying to force the direction of the book?

Overall I did find myself getting caught up in all the drama of it, it’s just that I expected huge things from Red Queen and found myself deflated by it’s predictability and clichéd natured. I will be picking up book two because, with that ending, how can I not (although it reminds me of the ending of the Divergent film!). I don’t know whether I will be rushing to pre-order it though…