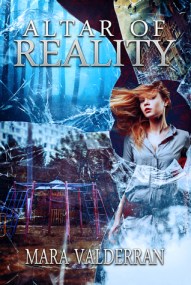 “Can we save the lectures for when I’m out of hospital? Shouldn’t that earn me a ‘get out of lecture free’ card, at the very least?”
“Yeah, yeah. Especially since you got us out of our chemistry exam.”
“See? I can be a hero too.” – 5%

Sixteen year-old Madeline has struggled with epilepsy for most of her adolescent life, leaving her something of a social pariah. Things go from bad to worse when she wakes up from her first grand mal seizure in an extremely unfamiliar world but surrounded but familiar faces. Her hometown is in ruins, the aftermath of a Cold War turned hot.
Thomas, the boy that stomped on her heart a year ago, and his brother Brandon have been hiding her away since the explosion that killed her parents. The Lord Commander, now running the southern territories, believes Madeline died with them and the brothers need to keep it that way. The biggest problem? The explosion happened when she was twelve.
Madeline isn’t sure what to believe. The brothers insist her memories must be of a dream life she created while in her coma. But when she returns to the reality she knows, they insist this war-torn world must be the dream. She doesn’t know if she’s truly caught in the middle of a brewing rebellion or teetering on the brink of insanity. As she finds herself flipping between the two lives, her heart becomes torn between two versions of the same boy and the lines between her realities begin to blur.

The book has a good, solid start to it and while the concept was something I thought I’d like, I struggled with this book. To be honest, I thought I may, as there was a sort of love triangle mentioned in the blurb but as it was two versions of the same guy I thought it would be fine.

I discovered however, that the shape in this instance had too many points to be a triangle, but this isn’t the main reason I struggled. I think, from the writing style, this books is aimed at younger teens as there is no complexity, no filler, no pattern and no explanation. By which I mean there is no mystery, everything is easily worked out, things happen in places it would be better they didn’t – not because of plot (Someone finding out secrets or what have you) but because that’s where they were when they were talking about needing to do that. Her accomplishments are quite small and everything is too easy which is why I struggled. It was a good enough storyline that it could have stood the extra complexity of a novel for an older audience and I really wanted it to be that novel.

All in all, a good story but a little too young for me, I’d have liked a little more challenge. Despite the cliff-hanger ending, I don’t think I’ll be picking up the next one.