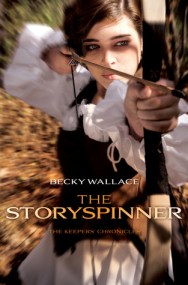 “Someone has been hunting girls who match your description: dark haired, pale eyed, beautful. Fernando told me that two girls have been murdered in Impreza this year and we’ve heard rumours of other similar murders. All the girls bore a resemblance to the dead queen…”
- page 338

Drama and danger abound in this fantasy realm where dukes play a game for the throne, magical warriors race to find the missing heir, and romance blossoms where it is least expected.
In a world where dukes plot their way to the throne, a Performer’s life can get tricky. And in Johanna Von Arlo’s case, it can be fatal. Expelled from her troupe after her father’s death, Johanna is forced to work for the handsome Lord Rafael DeSilva. Too bad they don’t get along. But while Johanna’s father’s death was deemed an accident, the Keepers aren’t so sure.
The Keepers, a race of people with magical abilities, are on a quest to find the princess—the same princess who is supposed to be dead and whose throne the dukes are fighting over. But they aren’t the only ones looking for her. And in the wake of their search, murdered girls keep turning up—girls who look exactly like the princess, and exactly like Johanna.
With dukes, Keepers, and a killer all after the princess, Johanna finds herself caught up in political machinations for the throne, threats on her life, and an unexpected romance that could change everything.

I really enjoyed this book more than I anticipated. I almost didn’t pre-order it! Shocking I know. The description makes Rafael sound horrid and power hungry and you wonder why on earth she’d fall for him, but he really isn’t. In fact I think Rafi and his brother Dom are my two favourite characters (LOVE Rafi’s name!). I thought that most of the characters were well formed, except for some of Johanna’s family, but considering they were barely in the story, it’s not too surprising.
Actually, what was nice was that, though Johanna was refereed to as beautiful once or twice she never disagreed or agreed. She was who she was and if that’s what you thought about her, that was lovely but she was off to walk on her hands so see you. She knows how to deal but she also knows when she needs to accept help. She’s not full of herself, conceited or insecure and fishing and it’s actually quite nice to just get on with the story instead of having a character pointing out flaws and attempting to be ‘relateable’. She’s a long lost princess who was raised as an acrobat, relating just isn’t happening.

Each chapter was from a different persons point of view; either Rafi, Johanna or one of the 4 Keepers. I thought this was very clever. It’s not told in first person, so while you got to see a little of how they each felt or what they thought, the jumping about wasn’t bothersome or annoying. Speaking of not annoying, there was no love triangle to complicate an otherwise lovely story and they actually seemed to talk to each other (or at least SOME of them did) which was also something I found refreshing as that can be used as a plot point just as frequently.

This was a great start to a new series, the world building was just enough to keep everything clicking along and to keep you interested and ready to pick up the next one to find out…just how they get out of that tree!