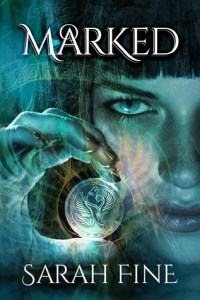 “Protecting the future is more important than righting the wrongs of the past.”

This is my A Book With A One Word Title choice for the 2015 Reading Challenge.

In a broken landscape carved by environmental collapse, Boston paramedic Cacia Ferry risks life and limb on the front lines of a fragile and dangerous city. What most don’t know—including her sexy new partner, Eli Margolis—is that while Cacy works to save lives, she has another job ferrying the dead to the Afterlife. Once humans are “Marked” by Fate, the powerful Ferrys are called to escort the vulnerable souls to either eternal bliss or unending fire and pain.

Unaware of Cacy’s other life, Eli finds himself as mesmerized by his fierce and beautiful partner as he is mistrustful of the influential Ferry clan led by the Charon—who happens to be Cacy’s father. Cacy, in turn, can no longer deny her intense attraction to the mysterious ex-Ranger with a haunted past. But just as their relationship heats up, an apparent hit takes the Charon before his time. Shaken to the core, Cacy pursues the rogue element who has seized the reins of Fate, only to discover that Eli has a devastating secret of his own. Not knowing whom to trust, what will Cacy have to sacrifice to protect Eli—and to make sure humanity’s future is secure?

YAY! Sarah Fine has written a new series, an Adult Paranormal Romance series no less. And it’s Awesome! I have read quite a few of her other books and completely adore her writing style and her way of creating something special and unique. This series is no exception. She has taken a well known aspect of Greek Mythology, thrown it into the future, added some dystopian aspects and a steamy romance and voila! an epic new series!

I was a little confused at the beginning as the setting was very vague. It took a while to realise that it was set in the future, at a time when most of Boston (where this is set) was flooded, transport was therefore only by boat and the water was toxic. It was an interesting world but I just wished that there had been more detail earlier on so that we could understand more of what was going on. To be honest there wasn’t that much information by the end of it as to HOW the world had ended up the way it had. But I don’t think this mattered to much as this was a really character and plot driven book.

Cacy Ferry works as a paramedic, a dangerous jobs, since pirates try to capture casualties to harvest their organs for the black market, but what people don’t know is that as part of the Ferry family she also transports souls from ‘The Veil’ (Limbo) to the afterlife (Heaven or Hell). Her family have worked along side a race of monsters, called the Kere, for centuries. A Ker’s role is to mark a soul who is fated to die and set them on their course to death. In working together they earn gold that makes them rich. But when Cacy’s father the Cheron, who is not fated to die, is murdered, a whole sequence of events begins to unravel the future. Cacy must find out who has gone rogue and fast before it is to late to save the future.

The plot was unfaultable in my eyes. I loved every twist and turn. Some parts were easier to see coming, but others left me jumping up and down, squealing like a little girl! I loved the mythical edge and the idea of family and destinies. It was very hard to know who to trust.

While I loved the plot I wasn’t as sure about the romance.

Cacy finds herself with a new paramedic partner. His name is Eli and he is from Pittsburgh which has become a desert wasteland. Eli has moved to Boston with his older sister Galena. After a terrible experience in their past their relationship is strong, Eli is very protective of his sister and would do anything for her.

Cacy and Eli are instantly attracted to each other and yet there always seems to be an issue that stops them from acting on their feelings. It was a little annoying to be honest, they were constantly thinking about ripping each others clothes off but never actually getting anywhere. I think by the time something did happen I had become so invested in the paranormal storyline that I didn’t actually want to read all the steamy love scene stuff, I just wanted to get back to the story! But I was won over eventually and was really routing for them. Obviously as with all, romances there were more, larger, hurdles for them to get over but these problems, to me, were more important to the story and therefore less annoying. I was impressed though by the romantic scenes. As Sarah Fine’s first adult romance I didn’t really know what to expect but gosh were they HOT! To be honest I don’t know why I worried at all, because she’s always managed to get me hot under the collar with her YA kissing scenes!

I actually can’t decide who my favourite character was because they were all pretty fantastic. Even the lesser roles were well written, such as Shauna, Trevor and Len. I enjoyed the use of the alternating point of view of Cacy and Eli because I got to really understand both of them. I liked that they were both strong, determined characters with a little bit of a vulnerable side. They could both be very naive at times too, which made them easier to relate too.

Overall this was a well-paced and exciting story that brought an interest new twist to Greek Mythology and the Paranoral Romance Genre. I can’t wait to start book 2! I’m so glad I requested Claimed as well!