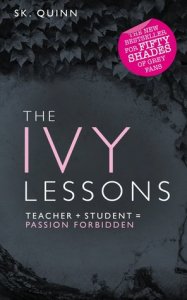 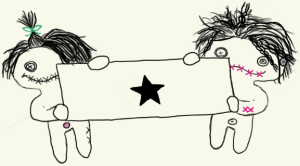 ‘Life can get very boring when you can have anything you like, believe me.’ Loc 4100

When Sophia wins a post-graduate place at Ivy Drama College, she can’t believe her luck. The college is owned by one of the most well-respected young actors in London, Marc Blackwell – who not only founded the college, but teaches the students.

Known for his strict classes and belief in discipline, Marc has a reputation for being arrogant and aloof, yet Sophia soon finds herself drawn to this cold, fascinating young man.

Soon, Sophia is embarking on a journey of sexual discovery that promises to explore all that is forbidden between teacher and student.

I really should have paid more attention to the cover with the sticker that says The new bestseller for fifty shades of grey fans… but I was distracted by the Teacher + Student = Passion Forbidden.

It started off ok with Sophia getting a letter accepting her to a prestigious drama college in London. She’s excited because one of her teachers will be a famous actor call Marc Blackwell. Sophia’s home life was interesting, she had a hopeless father who was lovely but couldn’t look after himself let alone his self-centered second wife and their new baby (Sophia’s half-brother), Sophia was a nice character, unsure of herself and only wanting to do what was best for her family. It took a lot of coercion to get her to leave them behind and go and for fill her dreams. I also quite enjoyed her arrival at the college and getting to know the other students. But it was from this point on that it kind of went down hill.

There is hardly any chemistry between Sophia and Marc. She seems to be desperate for any kind of attention and so ends up asking for his help with her acting. Marc gives her a seductive role to improvise with and ends up kissing her. You’re meant to feel that he is the one being manipulated into this love affair but to me it felt more like he was some kind of scummy teacher who got his kicks out of doing something… or anything to be honest… that he shouldn’t. He takes control of everything and makes Sophia do quite a lot of things she feels uncomfortable doing because he is helping her to ‘Stretch her boundaries and loss some of her inhibitions’ apparently and this will somehow help her to be a better actress. The fact that as soon as anything happened between them her future career would have been tainted never seems to occur to them.

I didn’t like the other teacher Denise either! Who encourages a romance between a teacher and a student? She seems to get some kind of kick out of asking inappropriate questions of Sophia about her relationship with Marc, whilst having her in her office for tea. it’s weird and kinda creepy.

The only redeeming part of the book was the sex scene in the stationery cupboard. That was hot, but many of the other scenes I felt were tainted by the dirty older man vibe I got. They were generally in open, or viewable areas, where I felt Marc got off on the thought of them being caught more than actually enjoying a connection with Sophia. This is also why I found the declaration of Love so ridiculous and irritating.

This series is not for me and I won’t be continuing with it.