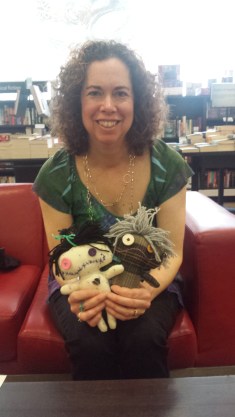 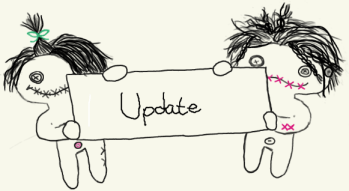 EEEK! We made it to London and we met Maria Snyder!

Navigating our way around London was actually quite easy and we made it to Waterstones in good time. At which point we discovered there was SIX floors to this place. SIX!! as Ms4Tune said “Worst place for bookagolics to go. Like having an AA meeting in a pub.” But more importantly THERE WERE NO SIGNS! We didn’t know where the signing was going to be, so we wondered up and down for a while before we over heard a Waterstones employee saying to some people that there was no actual set up for queueing and that they should just mill around while they waited for her to get there. So we joined the milling and not long after that, there she was!

We were terribly nervous, having never been to anything like this before and it wasn’t like in the films. No big table and massively long queue, which was actually quite nice. They set her up at a seating area, so there were some sofas and a table with books on. Mostly Shadow Study, but also some new-release copies of the other Study books. Being terribly polite and quite British, we didn’t swarm her but formed and orderly queue… 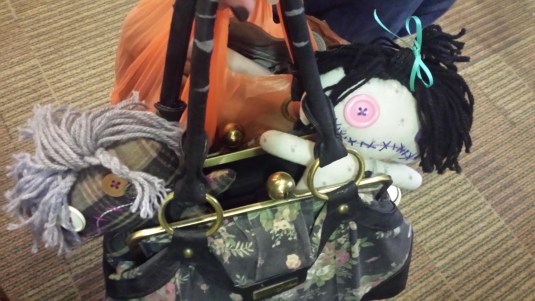 She started early, I think because we were all there and she was there and otherwise we’d all have been staring awkwardly! Those in the queue before us seemed more practised at this sort of thing and were more comfortable having a chat. We discovered that the new covers are actually the Australian covers and the original UK covers are her favourite. While we have our favourite covers for books, we’ve never considered that authors do too!

When it was our turn, we didn’t want to ask all the cliché questions which didn’t leave us much. So we produced our dolls and asked for a picture and explained that we were bloggers and that we had unfortunately been unable to attend the event on the Wednesday. Maria said that the event had been good and that everyone have been somewhat shy at first. She asked us if we were part of the blog tour, but we told her we hadn’t been approached but that we had added the banner we’d been sent to our blog anyway and of course there is this post!

Paein didn’t take all her books with her, just Shadow Study and she wishes now that she’d have taken at least poison study too. She wasn’t sure if it would be allowed and she didn’t want to push her luck but she hopes to next time take the whole lot! And that trying not to gush is fine but she should have perhaps still mentioned that Valek and Yelena were her favourites. Sat afterwards with tea and using the ever magical ‘hindsight’ Ms4Tune noted that you dont realise how ridiculously star struck you get until you’re in the situation and that perhaps next time we should be better prepared while Paein felt that it was difficult to wrap her mind around the fact that the person you’re talking to is the one’s who’s mind came up with the book in your hands!

As to Maria herself, she was perfectly lovely and down to earth. She was nice and chatty but seemed as unsure what to do with us as we were with her. And of course, Paein notes that she had great hair!

At the end of it all we feel we will do better next time and we look forward to the next signing we can go to! 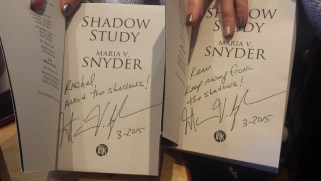 Meteorologist turned novelist, Maria’s been writing fantasy and science fiction since she was bored at work and needed something creative to do. A dozen novels and numerous short stories later, Maria’s learned a thing or three about writing. She’s been on the New York Times bestseller list, won a half-dozen awards, and has earned her MA degree in Writing from Seton Hill University where she’s been happily sharing her knowledge with the current crop of MFA students. She also enjoys creating new worlds where horses and swords rule, ’cause let’s face it, they’re cool, although she’s been known to trap her poor characters in a giant metal cube and let them figure out how to get out. Readers are welcome to check out her website for book excerpts, free short stories, maps, blog (http://officialmariavsnyder.blogspot.co.uk/2015/03/uk-book-tour.html), and her schedule at http://www.MariaVSnyder.com.

A full list of her works can be found here:

and of course, no information section would be complete without a link to the publishers:

Thank you Harlequin UK for organising this event! Please organise more in the future!