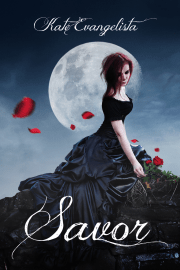 PLEASE NOTE: This is a New Adult book, NOT a Young Adult book and therefore NOT a sequel to Taste, though it does involve all the same characters.

“I decided to take the characters of Taste and deposit them in a whole different universe, to refresh them in a way.” –Kate Evangelista

Dakota Collins is an eye patch wearing, workaholic photography student who gets to spend an entire month with Vicious, only the biggest indie rock band out there. They’re the subject for her spring showcase introspective, a project she needs to pass in order to graduate, a chance meeting at a club opening is her entrance to their world. Permitted to live with them for a month, she develops friendships and gets closer to them than she ever thought possible, most prominently their bassist Luka Visraya. At the end of her month, she’s given an offer she’d be crazy to refuse, except several things come to light rather suddenly, leaving her questioning everything.

So, to say this book had us confused is perhaps an understatement. Having previously read part (Paein) or all (Ms4Tune) of Taste, the happenings of Savour did not fit into what we knew. A quick email to the author settled our confusion, so, if you’ve read Taste, please forget what you know as much as possible, if you haven’t read Taste, then please don’t! Until you’ve read Savour/Vicious Feast of course.

I quite enjoyed reading this book, even though I’d previously read part of Taste and assumed this carried on from where that had ended. To be honest, the knowledge I had of Taste didn’t effect Savour until I got close to the bombshells at the end, at which point I was so confused it was unreal…(I have to mention this because it contributed to my first impression of the book which what a whole lot of “Whaaaaaat?!!”)
Now I know they’re separate, though I still have some major questions my mind is a lot quieter on these matters. Having gone from the middle of Taste to the start of Savour, I’m not sure whether I just got Dakota and Phoenix merged or whether they’re similar in personality, I hope to get this sorted with the next book. Didn’t seem overly fussed with Demitri either, he and Phoenix seemed to have a more of a background roll in this story. I was quite entranced by Luka perhaps because little things about him reminded me of an old favourite rock star or two of mine.  Yana reminded me of an Anime character and Dray, ah he was my favourite. I so badly hope that we get to see more of him. Maybe a book from his point of view? It could work!…
Though the book was building up to several large revelations surrounded by more unanswered questions than answered ones, it didn’t feel like it was stringing you along until it could trap you into its mystery so that you’ll fork out for the next one. I can’t say how I feel about it all yet exactly, it’s a really good starter book but I’ll need to read the next one and see how it plays out. It’s all riding on the explanations and details of the vague hints and revelations we were given, so no pressure there Kate…

I had such a mix of emotions with Savour. This is the reason for my middle ground rating. While I found Dakota and Luka to be interesting and I loved watching their relationship develop, I found other characters such as Phoenix and Demitri less likeable. I don’t wanna give to much away but I found Phoenix to be kinda a Bitch! No matter how nice she was perceived to be by Dakota and I wasn’t overly impressed with Demitri either…
My favourite extra character by far was Dray. He was so sweet and so nerdy, such a breath of fresh air in a group of overly pretentious rock band members. I think because of the spoilers I picked up from Taste the relationship bombshells dropped in Savour were a little lost on me.
But I was still ridiculously surprised and excited by the ending… oh my gosh that ending… there was just so much packed into those few short chapters that my mind was reeling!!! It made all those little niggly bit slot into place and I loved it!!! Such a clever twist. I can’t wait for the next book it promises soooo much!!! Good luck Kate!

We Just want to add a thank you to Kate for giving us the opportunity to review her book!

For our book tour post and more information about both the book and the author, please click HERE!