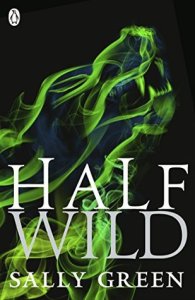 This is my A Book Set in another Country choice for the 2015 Reading Challenge.

The stunning sequel to Sally Green’s breathtaking debut novel – HALF BAD. Now available for pre-order! After finally meeting his elusive father, Marcus, and receiving the three gifts that confirm him as a full adult witch, Nathan is still on the run. He needs to find his friend Gabriel and rescue Annalise, now a prisoner of the powerful Black witch Mercury. Most of all he needs to learn how to control his Gift – a strange, wild new power that threatens to overwhelm him. Meanwhile, Soul O’Brien has seized control of the Council of White Witches and is expanding his war against Black witches into Europe. In response, an unprecedented alliance has formed between Black and White witches determined to resist him. Drawn into the rebellion by the enigmatic Black witch Van Dal, Nathan finds himself fighting alongside both old friends and old enemies. But can all the rebels be trusted, or is Nathan walking into a trap?

My Review of Half Bad (book one of the series) can be found HERE. It made me laugh, re-reading my review, as the last line says:

Well apparently I can forget Half Bad because going into Half Wild, I found I couldn’t remember anything that had happened and so had no idea what was going on! The only things I remember from Half Bad were the horrific scenes of abuse and cruelty that Nathan endured. So when Half Wild started with Nathan waking up in the woods, naked and covered in blood, I felt a bit lost and thrown in at the deep end. It took a while for that feeling to go away.

I always said that I wasn’t the biggest fan of Half Bad and that I would give this series one more chance. And I’m glad I did.

The beginning of Half Wild was a little slow. Not a lot happens and Nathan does a lot of listing ‘happy’ things and just general monologuing to fill in the time. I get that its supposed to represent time passing but it got a little tedious. I remember the same thing happening in Half Bad and that was part of my issue with it. Thankfully this book moved away from that and began to pick up a fast pace.

The first half of Half Wild is filled with Nathan’s search for Annalise. He teams up with Gabriel again, along with two other witches, Van (a black witch) and Nesbitt (a half-blood). Van gives Nathan an offer. She will help him find Mercury (who is holding Annalise captive) in exchange for him joining the Alliance (those who a pose the White Witch Council).

While on their rescue attempt, I really enjoyed the build up of the friendship/something more, between Nathan and Gabriel. Gabriel is wonderful and their relationship was so sweet and tender. I almost hated Nathan for his obsession with Annalise because it was preventing the development of feeling between the two boys.

I did get Nathan’s need to find and rescue Annalise though. She was the first person, outside of his family, that didn’t judge him for being half-black. She made him feel worth something and because of that, he loved her very much.

The second half of the book was all about the Alliance and Nathan finally getting to know his Father, Marcus. I felt this was really well handled as both Nathan and Marcus didn’t really know how to talk to one another and had to find a way to bond. Marcus reminds me of those dogs that you find in gangs, fiercely loyal but also very unpredictable and willing to kill anyone that even looks at them funny.

I enjoyed Half Wild a lot more than I did Half Bad, and I think it’s probably because I found it had more direction and a better pace than Half Bad. I also liked that Nathan was finally finding his feet. Yes, he waited around a lot for other people but it did fight back and was more determined in this novel. I liked him a lot more. I’m hoping the final instalment of this trilogy will see Nathan finally snapping out of his obsession with Annalise (because she’s basically turned into one of the Germans during world-war 2 that deigns all knowledge of what is happening to others because its her family who’s doing it to the innocent!) and finally embraces himself, his whole self, and becomes the most amazing saviour of all witches!