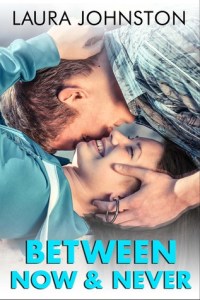 “My life, my happiness, doesn’t depend on guys. This was my mom’s fatal mistake, one I won’t repeat” Loc 589

My heart thrusts with a force that takes me by surprise. Telling me something I don’t understand. A splitting pain, a longing to slip back under. They tell me I was in a hit-and-run, but I can’t remember what happened that night. All I know is that I woke up with pictures in my pocket, a card from one of those photo booths in the mall. And I’m in the pictures. Cody Rush. Me and…

Her brother was there that night, and my dad, the FBI agent, was the one who put her mom behind bars. What’s the connection? And why won’t Julianna talk to me now? Somehow, she holds the key to it all, and getting close–real close—to her for the answers I need will be no hardship at all…

I’m really conflicted about Between Now and Never. Rating this was really difficult. I will try to explain why…

Between Now and Never is written from two points of view. It follows Cody Rush a senior with huge prospects to become the next big Basketball champion and Julianna, a girl who is willing to do anything to help and please her family, even if they don’t really deserve it. Cody and Julianna are linked. They don’t know it straight away, but Cody’s father was the arresting officer who put Julianna’s mother away for fraud. Fraud she committed so she could put Julianna’s brother (and Cody’s new friend) Vic through Rehab. But Vic is a (word that rhymes with his name). He doesn’t care about anyone but himself and that is evident from the beginning when he drags Cody along to a Drugs deal. Cody hides and records the whole thing. Unfortunately he is discovered and then finds himself running for his life.

I loved this part of the book, it was full of suspense and had me sitting on the edge of my seat. I was totally gripped and didn’t want to put the book down. I needed to know what happened even if the blurb kinda gave it away! But all of this suspense ends when he’s hit by a car…

Cody wakes up with amnesia, he can’t remember how he ended up in the hospital with a broken leg. All he knows is that he lost his phone, he was picked up by Vic to go to a party and that he must have met up with Julianna because he has pictures of him and her in his pocket. I thought this would be a Columbo-style investigation where we knew what happened but we have to watch them figure it all out in a clever suspenseful way! But sadly the pace of the book took a total plunge after this because Cody doesn’t seem that interested in figuring out what happened to him. Instead he spends most of his time chasing after Julianna and we spend most of the time reading about Julianna preparing for a Beauty Pageant that she doesn’t really want to do but because she wants to cheer her mum up, she has entered anyway.

This is were I got all conflicted… I found myself really annoyed that we abandoned the investigation side of the story because, while Cody may have forgotten what happened to him, I hadn’t. But somehow I did end up liking how we began to find out more about Cody and Julianna. They seemed to have some real chemistry. Both had suffered loss in different ways, both wanted to please their families, and both seemed to be just generally nice people. I really did like them. But it dragged on. I didn’t like how we had to read all about a beauty pageant when all I wanted was for them to figure out what I already knew!!!

In the end the finale seemed rushed as though we didn’t have enough time to find out the answers. I feel mean giving it only 2 voodoos because I really did enjoy it but at the same time there were just so many issues that I can’t really give it more.

I would be interested in reading another of Laura Johnston’s book as I feel perhaps it was just the plot and the way it unfolded that I didn’t enjoy as I did like her characterisation. It would be interesting to see if a more straight forward story wins me over.