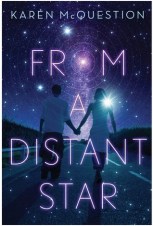 Thank you to Karen McQuestion via Netgalley for a chance to read this book in exchange for an honest review.

Seventeen-year-old Emma was the only one who hadn’t given up on her boyfriend, Lucas. Everyone else—his family, his friends, his doctors—was convinced that any moment could be his last. So when Lucas miraculously returns from the brink of death, Emma thinks her prayers have been answered.

As the surprised town rejoices, Emma begins to question whether Lucas is the same boy she’s always known. When she finds an unidentifiable object on his family’s farm—and government agents come to claim it—she begins to suspect that nothing is what it seems. Emma’s out-of-this-world discovery may be the key to setting things right, but only if she and Lucas can evade the agents who are after what they have. With all her hopes and dreams on the line, Emma sets out to save the boy she loves. And with a little help from a distant star, she might just have a chance at making those dreams come true.

This was a cute teen story which didn’t drag and did flow really well. It wasn’t the story I was expecting to read when I read the description, I seem to have a talent for miss reading blurbs at the moment, but never mind.

I have to be honest though, Emma was rather annoying. Her whole life revolved around Lucas and while later on in the story she realised that she was perfectly able to cope without him, I found her self centred and terribly narrow minded. She even admitted at one point that she hadn’t thought past getting to that moment (which is where she learnt a little of what she was capable of) and she had to be prompted to do the right thing. Some of it may have been because she was on the cusp between telling-an-adult and being-old-enough-to-sort-it-herself but I certainly wasn’t impressed with her attitude. I hope she doesn’t revert back now that she’s been awakened to the world around her and loose all of her development. Despite her annoying attributes, I found the quiet message of Emma’s situation to be well presented.

I think my favourite character was possibly Scout and I hope he got his HEA when he returned. It looked a little rocky for a moment there, especially with the love triangle overture, but thankfully that went away again. Another favourite was Eric, I don’t feel he got enough of a story arc, he was clearly highly clever and all sorts of resourceful, but only so much of him could be snuck in as the story was first person from Emma’s point of view. I certainly didn’t like Lucas’ mother. What was her issue?! Goodness!

There were a few moments in the book that seems to happen because plot. (They don’t quite have a reason to happen except to further the storyline) Some of the moments even confused Emma, but this wasn’t too bothersome as they fit in well with the flow of the book and any other means to insert the information or create the situations would have resulted in a more complex or lengthy story.
They didn’t make too many friends on their road trip…but instead of making the story drag it was actually quite entertaining and I liked the twists they kept finding along the way! Especially at the two houses they stopped at, most especially the last!

All together I found this an enjoyable teen sci-fi read.