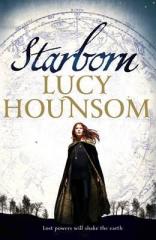 ”It was so real; she could remember the smell of heated hair and the brush of the evening wind on her face. Rather than a vision, it was more like…a memory.”

Death and destruction will bar her way. . . Kyndra’s fate holds betrayal and salvation, but the journey starts in her small village. On the day she comes of age, she accidentally disrupts an ancient ceremony, ending centuries of tradition. So when an unnatural storm targets her superstitious community, Kyndra is blamed. She fears for her life until two strangers save her, by wielding powers not seen for an age – powers fueled by the sun and the moon. Together, they flee to the hidden citadel of Naris. And here, Kyndra experiences disturbing visions of the past, showing war and one man’s terrifying response. She’ll learn more in the city’s subterranean chambers, amongst fanatics and rebels. But first Kyndra will be brutally tested in a bid to unlock her own magic. If she survives the ordeal, she’ll discover a force greater than she could ever have imagined. But could it create as well as destroy? And can she control it, to right an ancient wrong? With George R. R. Martin’s Game of Thrones now a huge TV success, fantasy fiction has never been more popular. And these books are traditional fantasy at its very best.

I found this book a little hard going to start, but that’s possibly because things were going on at the same time and I was unable to devote the usual attention to it. I loved this world and what was going on with it though for some reason I was convinced it was a standalone. It really isn’t! That’s not to say that it ends on a cliffhanger, but some people are off on a new adventure, leaving others behind. (Which I can foresee causing issues…)

This book wasn’t particularly fast paced, there were hints and clues and we tended to work things out before Kyndra, I don’t think I was too surprised by anything as the story unfolded, not because I found it predictable, but because the story told me slowly, as if it was revealing it to me rather than shoving it in my face.

I found it hard to work out whose side I was actually on in this story which I found really interesting, though there was certainly one guy I wasn’t backing! So much happened in the story, it’s a surprise to step back at the end and see it was a build up, though I don’t believe the story could be left there.

As to a favourite character, I find it hard to choose between Bregenne and Nediah. They’re opposites in many ways and yet they balance each other out. Their balance is perfect and I hope that it’s something they can both accept. I think that, while Nediah could do with more growth, Bregenne has perhaps undergone the biggest character change of all, possibly even bigger than Kyndra’s and it’s only going to keep on going for her. I feel she’s the secret star to the show and I can’t wait to see what happens in the next book, for all of them!