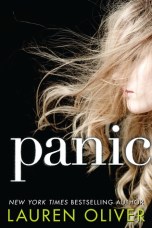 “When you love someone, when you care for someone, you have to do it through the good and the bad. Not just when you’re happy and it’s easy.” - 87%

Panic began as so many things do in Carp, a dead-end town of 12,000 people in the middle of nowhere: because it was summer, and there was nothing else to do.
Heather never thought she would compete in Panic, a legendary game played by graduating seniors, where the stakes are high and the payoff is even higher. She’d never thought of herself as fearless, the kind of person who would fight to stand out. But when she finds something, and someone, to fight for, she will discover that she is braver than she ever thought.
Dodge has never been afraid of Panic. His secret will fuel him, and get him all the way through the game, he’s sure of it. But what he doesn’t know is that he’s not the only one with a secret. Everyone has something to play for.
For Heather and Dodge, the game will bring new alliances, unexpected revelations, and the possibility of first love for each of them—and the knowledge that sometimes the very things we fear are those we need the most.

This book wasn’t one I planned to read, in fact I had forgotten I owned it! but my iPod had more battery than my phone at a time when I needed a distraction and this was one of the four books I’d apparently downloaded onto it.

I don’t know why I thought this was an elsewhere book, perhaps – AGAIN – I got the blurb wrong, combined it with another in my head, but – again – it didn’t affect my enjoyment of the book. The dual point of view was a little confusing, but generally easy to follow as it was usually one then the other.

I found the storyline quite simple so I’m a little scared to talk about too much in case I give it away. But one thing that’s bothered me is; what happened to that last kitty at the end?! Can I have it?
Aside from that, it was quite fascinating, a tale of love and revenge, secrets and subterfuge. What else do you do in the summer holidays but participate in a game that could kill you? It was nice that you got to see some past winners and that our characters got to realise that it’s not the winning that counts, but HOW you win…