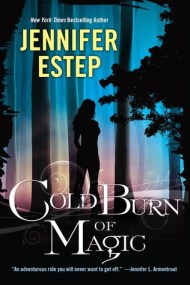 But then some nasty characters bring their Family feud into my friend’s pawn shop, and I have to make a call–get involved, or watch a cute guy die because I didn’t. I guess I made the wrong choice, because now I’m stuck putting everything on the line for Devon Sinclair. My mum was murdered because of the Families, and it looks like I’m going to end up just like her. . .

I enjoyed this book a lot more than the blurb and cover lead me to believe I would, but having listened to Maria V Snyder talk, I realise how little say authors sometimes have when it comes to the covers.

I did enjoy this book, the world is here, but not here because there’s magic and monsters – which you need to be nice to – and mob families living up a hill (which could actually happen, but shhh). The magic comes in the form of Talents which can be something like a skill or a sense. The monsters as bridge guards and tree trolls which all require a toll and the families compete for power over the tourists.
But I have questions, lots of questions. Some may go away before the book is released and some I’m meant to have, for example; who is her father? Other questions include; If Devon is so good at fighting, why does he always need saving? If he’s better than the guards, why doesn’t he carry a sword with him because not doing so puts everyone at risk? How does Lila fight like her mother if her mother died when she was roughly thirteen?

There were also a few little things that were semi-bothersome, however I’ve remembered this is a TEEN book, not a YA and so it’s likely those things were there on purpose so I wont be listing them.

I think my favourite character may be Devon. Obviously there has to be more to him than we see and I hope we get to see the real him in book two, which, incidentally is also coming out this year according to goodreads!!!
I feel like Lila is still that little girl inside and many of her choices are made for that little girl and not the woman she’s becoming, I look forward to seeing her growth through the series, she has great potential and while she is now motherless, she does have her mothers friend…

While reading I didn’t really notice, but afterwards I was surprised to find I was actually disappointed that we don’t get to meet any monsters face to face. We see the odd tentacle and the glowing eyes but that’s all. However, I know this changes in book two as there was a little sneak peek at the end of this book and I didn’t want it to be over quite so soon so I sneaked a peek…and actually I was happy about leaving it there. I still miss these characters, but oddly leaving them at the start of an adventure instead of the end of one seemed to fit them better.