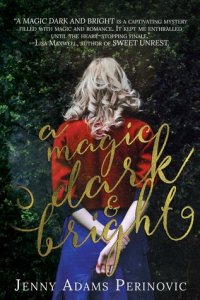 She meant to help a ghost…not unleash a curse.

Amelia Dupree hasn’t seen the Woman in White since the night her brother died.
The ghost seems to have disappeared from the woods surrounding Asylum, Pennsylvania—that is, until Charlie Blue moves into the creepy old MacAllister House next door. Amelia can’t help liking him, even though she spent her childhood thinking his grandmother was a witch. And she definitely can’t ignore the connection between his arrival and the Woman in White’s return.
Then Amelia learns that the Woman in White is a prisoner, trapped between the worlds of the living and the dead. Devastated by the idea that her brother could be suffering a similar fate, Amelia decides to do whatever it takes to help the Woman in White find peace–and Charlie agrees to help her.
But when Amelia’s classmates start to drown in the Susquehanna River, one right after another, rumors swirl as people begin to connect the timing of Charlie’s arrival with the unexplained deaths. As Charlie and Amelia uncover the dark history of Asylum, they realize they may have unleashed an unspeakable evil. One they have to stop before everything they love is destroyed.

When I initially read the blurb for A Magic Dark and Bright I envisaged a story that would scare the crap out of me. It sounded so creepy. It promised death and ghosts and a historical mystery. How could I turn that down??

Unfortunately it wasn’t as creepy as I had hoped. The deaths were dusted throughout but without any real tension leading up to them or much in the way of gory details. There wasn’t much in the way of ghostly interaction. There were sightings and visions but I never felt a connection to her character. And it was only towards the end that the danger and intriguing magical aspects started to show.

What was there though was the historical mystery. It was rich with information and slowly unfolded as the story went along. I really enjoyed this part of it. I liked finding out all those little secrets that the town held. I didn’t really understand why Amelia’s mum or the librarian kept the details of Marin from the children. I don’t see how it would have hurt them to be aware of past situations in the town. It felt, in some parts, as though the author was hinting at information but didn’t want to hand it to us at just yet. This was REALLY infuriating!

I liked the relationship between Amelia and Charlie, I could see a sweet and tender romance building between them. I loved that Charlie was so cute and reassuring. I found the grief she was suffering, after the loss of her brother, was well done. It never overpowered the story but gave you a sense of guilt that fueled her need to find out why the ghost was there. I think the main characters were well developed and, because of Jenny Adams Perinovic’s writing style, I found them very easy to understand and like.

What I didn’t really like, and the main reason for my 2 star rating, was the prejudice and persecution dealt out by the lesser characters. As soon as Charlie arrived, he and Amelia were being taunted and accused of being involved in the murders. It seemed to me that there was hardly any evidence to support their accusations and people seemed very vocal with their hatred. Characters, such as Ben, seemed to have been thrown in just to shout rude and unjustified accusations at Charlie. It just seemed over the top to me… Certain scenes even seemed a little unnecessary (I’m thinking mainly of Erin West being aggressively rude to Amelia in the shop, when Erin was the one who slept with Amelia’s boyfriend…!)

Overall I think I just found that the romance thwarted the progress of the novel and slowed the whole thing down. I probably would have enjoyed this a lot more if there had been more of a sense of danger and less taunting, both by the characters with their accusations, and the author, when hinting at information and then refusing to give it. The build up of excitement towards the end and that cliffhanger ending may see me returning to this series to see what happens next…

I would recommend this book to lovers of the original Vampire Diaries by L J Smith as it has a similar feel with its magical aspects and having one foot placed in the past.